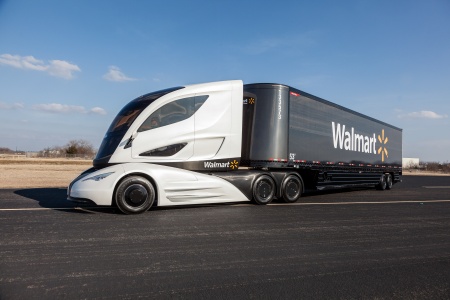 The retailer, whose private fleet of 6,500 trucks is one of the largest in the nation, will offer referral bonuses of up to $1,500, shorten the on-boarding process for new hires by more than a month and broadcast its first national TV ad focused on its 7,500 truckers. The program, which coincides with National Truck Driver Appreciation Week beginning Monday, aims to fill vacancies and improve the image of long-haul driving as a career amid a tight labor market.

“To be candid, right now I could hire a few hundred drivers,” Tracy Rosser, Walmart’s senior vice president of transportation, said in an interview. “It is getting tougher and tougher to find qualified drivers. It’s a really serious situation right now.”

How a Trucking Shortage Is Fueling U.S. Inflation: QuickTake

The dearth of drivers swelled to a record 296,311 in the second quarter, according to researcher FTR Transportation Intelligence. Combine that with wage hikes, rising diesel-fuel prices and higher freight demand, and the result was that June saw the biggest monthly uptick in long-distance trucking costs in nearly a decade. Those expenses have crimped Walmart’s profit margins for three straight quarters, one reason why its shares are down so far this year amid broader gains in the stock market.

Truckers are a big deal for Walmart — indeed, its path to retail dominance was plowed by its drivers. Founder Sam Walton began building his own private truck fleet in the 1970s after large trucking companies declined to deliver to Walmart’s mostly rural stores, located far from established trucking routes. Walton would show up at the drivers’ break room at 4 a.m. with doughnuts and talk to them for hours to get a fresh view of how his stores were faring.

Today, Walmart’s truckers take goods from massive distribution centers around the nation and deliver them to its 4,700 stores in a hub-and-spoke system that allows it to replenish goods quickly.

Two of Walmart’s past CEOs, Lee Scott and Mike Duke, rose up through its transportation department, and current CEO Doug McMillon spent his first day on the job doing a ride-along in a Walmart truck.

Walmart only enlists seasoned drivers — with at least 30 months experience over the prior three years — and new hires can earn about $86,000 a year with as many as 21 paid vacation days. That, Rosser said, has kept driver turnover as low as 7 percent historically. This compares with a turnover rate that hovers around 90 percent for long-haul truckers, with more than a third of new hires leaving after three months, according to the American Trucking Associations and driver-retention consultants Stay Metrics.

But Walmart’s turnover has risen slightly in recent months, Rosser said, amid cutthroat competition for drivers. Some carriers have boosted wages as many as three times over the past year and are handing out signing bonuses of as much as $10,000. The average age of a Walmart driver is 55, so the company is also losing many to retirement. Over the next decade, the trucking industry will need to hire roughly 898,000 new drivers, or an average of nearly 90,000 per year.

To fill the gap, Walmart is hiring nontraditional drivers like Aurelia Yoho, 44, a black mother of two from Chicago’s South Side who joined in 2016 after a stint in the Army and four years driving trucks for other carriers. She hauls loads five days a week from Walmart’s distribution center in Woodland, Pennsylvania, going as far north as Vermont or down through the Carolinas. She thought Walmart would never respond to her application, but once she came on board she has “kept the left door closed,” which is trucker jargon for working long and hard.