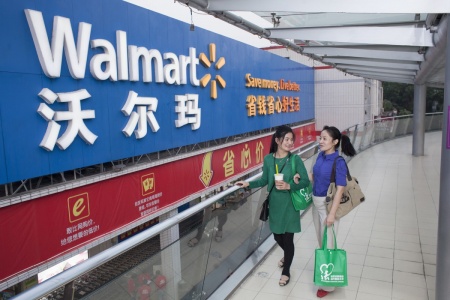 The deal will see the U.S. grocery giant swap its Yihaodian platform for a 5 percent stake in JD.com Inc, worth about $1.5 billion by the firm’s latest market value. The move also gives Wal-Mart a ringside seat in JD.com’s bitter rivalry with Chinese e-commerce leader Alibaba Group Holding Ltd.

The sell-off, announced on Monday, is a significant shift for Wal-Mart in China, where it operates more than 400 bricks-and-mortar stores. The firm has been shuttering underperforming outlets and grappling with soft online sales in the world’s second-biggest economy since it bought full control of Yihaodian in July last year, saying the site would play a leading role in its China strategy.

The deal echoes a strategy adopted by other international retailers and consumer goods makers – selling a local unit for a stake in a Chinese partner in order to prosper in a cut-throat marketplace. France’s Danone SA sold its Dumex brand last year to raise its stake in local dairy giant China Mengniu Dairy Co Ltd.

For JD.com, the deal could provide a boost in its intensifying competition in the fast-growing online grocery business with Alibaba – a market set to boom to nearly $180 billion by 2020 from $41 billion last year, according to data from food research body IGD.

Under the deal, JD.com will issue around 145 million new class A shares to Wal-Mart. JD.com will take ownership of Yihaodian, although the platform will continue to be operated by Wal-Mart.

The world’s biggest retailer had previously talked up Yihaodian as playing a key role in turning around its China business. Wal-Mart has worked to turn around falling same-store sales in China, where the firm said in May it was facing a “challenging macroeconomic environment”.

Analysts said that while Wal-Mart would give up a large amount of control and potential future profits from the business, the tie-up would allow the U.S. firm to concentrate on turning around its offline stores.