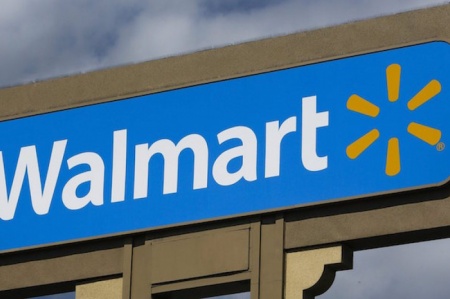 Such carts are an emerging opportunity for robotics companies as brick-and-mortar stores look for innovative ways to match the convenience of Amazon.com Inc. and other online retailers, said Wendy Roberts, founder and chief executive officer of Five Elements Robotics.

Roberts, who spoke Tuesday on a robotics panel at the Bloomberg Technology Conference 2016, said her company was working with the “world’s largest retailer” on such a shopping cart.

That retailer is Wal-Mart, which is evaluating a prototype in its lab and giving feedback to the New Jersey robotics company, a person familiar said. Wal-Mart spokesman Ravi Jariwala said he couldn’t immediately comment on the robotic shopping cart.

Wal-Mart has said it’s investing heavily in technology to make it easier to shop in its stores as it competes with online retailers, like Amazon. It has developed a way for customers inside stores to scan and purchase items on their mobile phone so they can skip the checkout line. It’s rolling out a service where customers can buy groceries online and have their order delivered at a store to their car, and in some cities has joined with ride-sharing companies Uber Technologies Inc. and Lyft Inc. on a grocery delivery service.

The retailer also is experimenting with drones as a way to deliver online orders or keep better track of inventory at its distribution centers. Wal-Mart is under pressure to show investors it is utilizing technology to maintain the efficiency edge that helped it become the world’s largest retailer.

Amazon has 30,000 robots deployed in its warehouse to help reduce the time and cost associated with getting online orders on their way to customers.

Wal-Mart has seen sales at its stores slow in recent years amid increasing competition. This year the company said sales worldwide would be unchanged when accounting for currency. Profits are expected to fall as much as 12 percent this year because of higher spending on wages and its technology operations.

Five Elements Robotics in 2014 introduced Budgee, a personal robot that can follow its user around inside and outdoors and carry things. The robot costs $1,400 and is helpful for people with disabilities, Roberts said.

Uniqlo's search for a global dominance