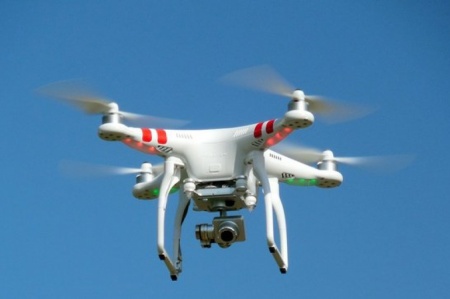 Under the patented scheme, a Wal-Mart store would have an automated system
that would operate the drones, dispatching them as necessary and controlling
their flight paths, which primarily would be arranged over store shelves,
according to the report.

Some dedicated landing zones would be within customer view, but it is not
clear yet whether the drones would pick up items for delivery elsewhere in a
store, or if they would be loaded by employees. Wal-Mart did not respond to
Fortune’s request for comment.

For some time, Amazon has been busy picking up patents related
to different potential drone delivery concepts, but it’s nice to see a
major brick-and-mortar retailer get its hands on at least one patent in the
space. This is an interesting one, too, because it doesn’t focus on last-mile
delivery, an area in which we have seen a lot of high-profile
tests recently.

The concept of using drones inside of a retail space is not necessarily a
new idea itself, and some market observers have suggested that rather than
being used in a public air space in which logistical, air traffic and safety
issues need to be sorted out, delivery drones actually could be used much
sooner in fulfillment centers, massive warehouses and outdoors between supply
chain structures located near one another.

Wal-Mart’s patent appears to set a blueprint for how such drones might be
used inside the store itself as part of everyday store operation and
management. You can imagine a customer trying to find a particular item, asking
a store associate about it and finding out it’s not out on a shelf, but might
be somewhere in the back. The associate could communicate with an employee in
the back to have a drone send the item out to the nearest drone landing zone.
At least, that’s one way we envision this working. Wal-Mart doesn’t seem to be
saying much about this scheme right now, and the retailer may or may not have
more specific applications already in mind.

The drone delivery market could also take a while to evolve. Even companies
like UPS, Amazon and Flirtey (along with 7-Eleven) appear to have made progress
figuring out how actual drone deliveries would work, many more things still
need to be ironed out. It’s little wonder that Gartner recently predicted that
drone delivery will
represent less than 1% of the drone market by 2020.

Among the to-do items, logistical questions remain around where delivery
drones would land at a residence or business, who would launch them and how,
what distances they would travel, and how they would recharge and refuel.
Beyond all that, air traffic and public safety issues need to be worked out,
and regulations need to be set — the latter being something that may
not happen in the U.S. for at least a couple of years.

Running delivery drones inside a large enclosed space could be much easier
to sort out, as federal airspace regulations wouldn’t come into play, and other
logistical and operational issues would be easier to control. Public safety of
course would still be a major concern, although it sounds like Wal-Mart may
already have that in mind with the likelihood in-store drones could be routed
over store shelves.

It’s not yet clear how serious Wal-Mart is about this particular concept.
Like Amazon, it could be trying to lock in patents on inventions and
architectures it thinks could occur to others in the space eventually. On the
other hand, maybe we’ll see this concept move toward a testing stage fairly
quickly. If that’s the case, other retailers, especially those operating out of
big boxes, are likely to start developing their own variations on this idea.
Stay tuned.

CVS to freshen up beauty offering this spring

EBay is taking on Amazon Prime and Wal-Mart in guaranteed delivery, free shipping