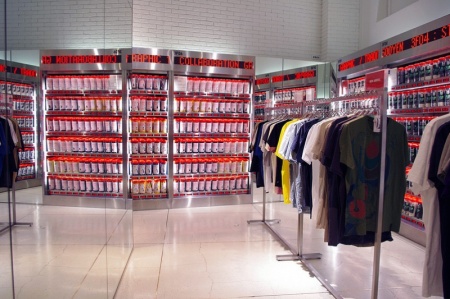 After a U.S. store expansion that fizzled a few years ago, fashion retailer Uniqlo is trying something new: selling its wares from vending machines.

The hip Japanese clothing chain owned by Fast Retailing (frcoy, -0.20%) known for trendy yet inexpensive down coats, jeans, and t-shirts with heating technology, is rolling out 10 vending machines in the next two months at airports and malls in several key U.S. cities including New York and Houston, the Wall Street Journal reported on Wednesday.

The Journal reported that the six-feet-high vending machines will a limited assortment, largely heat-retaining shirts and lightweight down jackets and items will be dispensed in boxes and cans and customers can return them at a store or by mail.

The move comes two years after the retailer scaled back its ambitious U.S. expansion plan as sales fell short and the company recognized that awareness of the brand was wanting outside of a few large markets. (Uniqlo, which has about 45 U.S. stores, at one point hinted it could reach 200 by 2020.) The retailer is instead focusing on tools such as pop-up stores and vending machines and focusing its big retail presence on flagship stores in places like New York’s SoHo district.

As Marisol Tamaro, Uniqlo’s U.S. marketing chief, told the Journal, vending machines are relatively cheap to operate compared to a store and can reach a lot of travelers. Fortune did not reach Uniqlo for comment. Globally, the travel retail market is expected to grow more than 8% per year through 2021, according to a Global Duty-Free Retailing Market 2017-2021. And the U.S. Department of Commerce projects the U.S. will see a 3.3% annual increase in international visitor volume through that year. These stats, which don’t include domestic travel, are a key reason many retailers have built up more of a presence at airports.

Such vending machines are fixtures at countless airports for retailers like

, which offers items like noise-canceling headphones and electronics that help pass the time. But such purchases are practical and don’t require being felt like clothes often do to persuade a customer. And there is no personal interaction, something critical in selling fashion. Still, they offer the chance for incremental sales and also can serve as effective advertising.