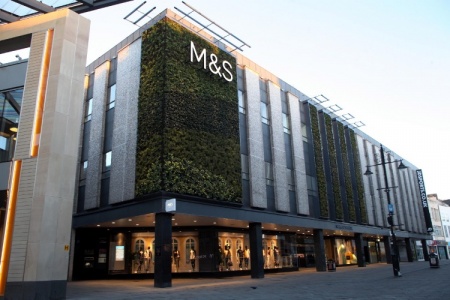 Jan 22 British fashion retailers will switch their spending firepower to technology from the high street in 2017 after online shopping became the key driver of sales growth over the all-important festive period.

Marks & Spencer is investing in apps, its website and logistics, while spending 350 million pounds over five years to close 10 percent of clothing and home space.

Department store John Lewis said it was cutting staff bonuses in part to enable it to invest in its online operations after 40 percent of its Christmas sales came from the web.

And Next, which failed to keep up with rivals for a second Christmas in a row, will spend 10 million pounds to improve its online operations and marketing.

The renewed drive in technology comes as British web-only players ASOS and Boohoo continue to race ahead, helping Britons to embrace online shopping more quickly than their European cousins.

And the pressure is relentless. ASOS, with nearly 5 million active users in the UK, said it would increase its own capital expenditure to keep ahead of the pack after it posted 18 percent UK sales growth in the four months to the end of the year.

Boohoo grew British sales by 31 percent in the same period.

Online sales have been booming in Britain for years, with ecommerce accounting for nearly a quarter of all purchases in December, according to the British Retail Consortium.

In the 52 weeks to Dec. 18, overall fashion sales fell 2 percent, according to market research firm Kantar Worldpanel, while pure online players grew 7 percent as fashion lovers snapped up goods through simple apps on their mobile.

While trading updates show that traditional retailers grew their sales by selling additional goods to customers picking up online orders in store, the move online also brings new challenges such as the high number of goods that are returned.

The signs of the change can be seen across the country, on small high streets where independent shops have shut – hurt by high business rates – and on the stock market where the share price of Boohoo has jumped by 500 percent in two years.

Pick-up lockers at railway stations and petrol pumps mean parcels can be picked up at any time, while changing rooms in standalone sites in the centre of towns allow purchases to be tried on and instantly sent back if not wanted, making it as easy to shop online as it is to wander down a high street.

The industry estimates that around 30 percent of womenswear items bought online are returned.

Traditional retailers have harnessed the web by persuading customers to pick up online-ordered goods instore, forcing firms to speed up delivery logistics and increase storage space in their shops.

The 133-year-old Marks & Spencer, which has struggled for years to grow its clothing business, beat forecasts for Christmas trading as investment in its app for iPad and mobile devices helped boost online sales.

More than 60 percent of all goods sold online were picked up in store – known as click and collect. Seeking to adapt the business to meet the new demand, its said in November it would not return additional cash to shareholders in the second half.

Debenhams, Britain’s No. 2 department store chain, also beat forecasts as those customers shopping online and in-store spent about two and a half times more than a shopper in one place.

The group, which appointed Sergio Bucher as CEO in October, is set to unveil its plans for the future in April and analysts at Liberum have said that could entail higher spending.

And Britain’s biggest department store John Lewis, one of the leading retailers online over the last 15 years, said it would speed up its internet strategy after 40 percent of its Christmas sales came from the web, up from 36 percent last year.

But the cost to transform the business is clear, with operating profit down 31 percent in the six months to end July. John Lewis said trading profit would come under pressure this year and the need to invest, plus the weaker pound, meant staff bonuses would be “significantly” lower.

Thomson Reuters data shows that 2017 full-year pretax profit at M&S and Debenhams is also expected to fall around 18 and 12 percent respectively.

Despite the high costs, the experience of retailer Next shows that the big names have little choice but to follow their online peers if they want to remain competitive.

Next will invest to improve its website and online marketing in a recognition that it may have fallen behind the standard of some competitors, where sites carry more content including video and numerous photographs to show how an item would look.

The Rise of Chat Bots and Their Implications for Social Media