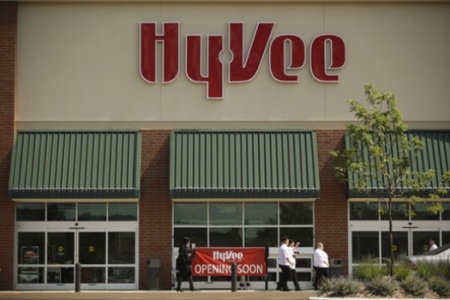 One glance into the new Hy-Vee store reveals where supermarkets are headed. A shrinking center store yields space to oodles of grab-and-go choices — heat-and-serve meals, grab-to-grill and fully cooked entrees — all to tempt shoppers on the run.

The Cottage Grove store is the Des Moines-based supermarket chain’s 245th store and its seventh in the Twin Cities since entering the metro area in 2015.

Hy-Vee made a big splash when it made its debut in New Hope and Oakdale in 2015. The stores are about 30 percent larger than a typical Cub Foods and offer an amenities assortment found nowhere else among its local competition, including a juice and smoothie island; several made-to-order grills and delis; two sit-down restaurants and a bar; a cut-to-order produce station; a bath and beauty department; a bagel shop; fast fashion for men, women and kids; a drive-up pharmacy; a health clinic; dry cleaning; and postal services.

One of the biggest changes in the Cottage Grove store is an expanded baby department, now taking up an entire aisle that includes more toys and a complete selection of breast-pump accessories from Medela.

Two years ago, Edeker said he planned to open four to five stores each year for the next 10 years. That pace is now slowing a bit. Cottage Grove will be just the second store opened this year, the first being in Savage. A Shakopee store is expected to open in November.

A new store in Robbinsdale, which was temporarily put on hold due to the controversial razing of the Terrace Theatre, is under construction and is planned to open in 2018. Next year, construction will begin in Columbia Heights and on one of two stores planned for Maple Grove. Both are expected to be completed in 2019.

There also are plans for a location in Chaska and a small convenience store in Lakeville just 2 miles from the large store that opened in Lakeville in 2016.

Hy-Vee’s first experiment with a smaller, 36,000-square-foot store in Des Moines has been doing well since opening last year.

With nearly two years under its belt in the Twin Cities market, Edeker said he’s comfortable with how the stores are doing.

Hy-Vee is a privately owned company with stores in the Midwest. It had sales of $9.8 billion last year. The new store will have 163 full-time employees.