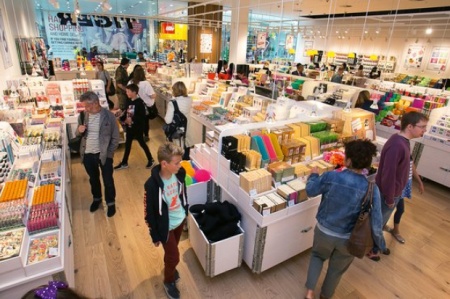 Outside an old warehouse in Christianshavn groups have gathered round a giant snow dome to watch a man wearing an inflatable Santa suit pretend to ride a reindeer. This is Flying Tiger Copenhagen HQ (or Tiger, as the Danish retailer was known until it officially changed its name earlier this year) and Christmas is in full swing.

Inside, the offices are the epitome of Scandi style: wooden floors, original beams and big picture windows overlooking the water. Shelves of sample products are a snapshot of what’s soon to arrive in stores. There are remote control sumo wrestlers and virtual reality goggles on one; a plastic snowball scoop and puppets on another.

Anyone who has shopped at Tiger won’t be surprised by the products. “Fun” is a key part of the formula that has seen the company grow from a market stall in Copenhagen 21 years ago to having, at the last count, nearly 680 shops in 29 countries. Last year, sales in the UK alone were £62m and global bestsellers are the simplest items: popping candy, pencil sets, soap bubbles.

Of course, a crucial component of its success is the low prices. What began as a pound shop – founder Lennart Lajboschitz left his brother’s girlfriend in charge and she couldn’t find the prices so he told her to charge 10 kroner, the equivalent of £1 for everything – now sells the odd item, such as a record player, for £100.

Described by one retail analyst as “an Ikea marketplace on speed”, Tiger attracted middle-class mums with its clean-lined look and retro music. And it’s true, the shopping experience does set Tiger apart (it’s far less stressful than going to Ikea), but so do the products. While others such as Wilkinson’s have made their name selling cut-price practical household items, Tiger taps into lifestyle trends – not just the obvious money-making occasions such as Halloween or Christmas.

As the craze for crafting took off, they introduced knitting needles and brightly coloured wool and, in response to the surge in cycling, this January, they are launching a range of bicycle kit. By contrast, failed retail giant Woolworths stuck to traditional categories such as confectionary and toys and, in shoppers’ eyes, wasn’t seen as being distinctive enough. There’s no danger of that at Tiger. Today, up to 50% of the 300 new lines introduced each month are designed in-house, either from scratch or given a Tiger twist with quirky new graphics and packaging

Topshop and Topman in landmark deal for mainland China stores