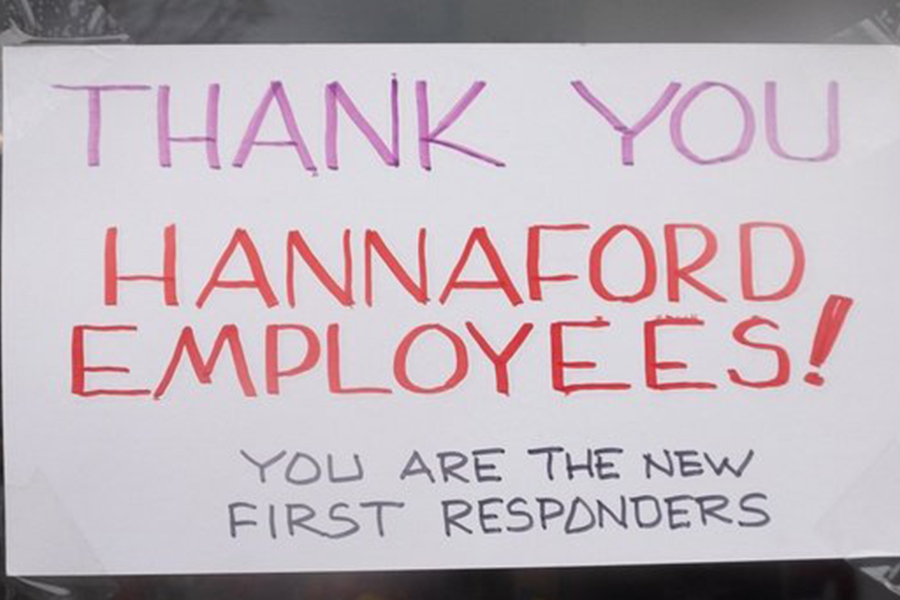 Even with most transactions frozen, this can be a good time to talk to customers, experts say. But retailers need to send the right message.

Despite the surge of e-commerce in the last two decades, personal transactions remain the lifeblood of most retailers, big and small. Thanks to the COVID-19 pandemic that has been arrested, with stores locked and even boarded up, and mall parking lots empty.

Retail workers and small businesses have borne the brunt of the situation, leaving them in a precarious state. Larger chains are scrambling to shore up their finances and shift their emphasis to online sales and marketing, even as they slash their marketing budgets.

Marketing, in the sense of communicating with customers, is where things get tricky. The emphasis must be on “helping, not selling,” according to Deb Gabor, CEO and founder of Sol Marketing and author of “Irrational Loyalty: Building a Brand that Thrives in Turbulent Times.”

“Retail is one of the most transactional businesses there are — buy a pack of gum, buy lunch, a gift for your nephew’s birthday, maybe five to 10 transactions a day, none of which are memorable,” she said in an interview. “This is a moment of truth. This is a time for retail to shine.”

Social values were already becoming increasingly important to consumers in recent years; now that has come to a head, according to Neil Saunders, GlobalData Retail Managing Director.

“You have to think about — if your purpose is no longer selling because you can’t sell or people can’t buy — what is your purpose as a retailer?” he said in an interview. “Marketing is all about enticing us to buy things, and right now that’s inappropriate. First of all, we’re not in the mood for it, second, it’s hard because everything’s closed, and third it’s not the time because it’s a hard time.”

Still, there is a place for marketing, several experts said, even as they cautioned against what Saunders called “crassness.” While the inclination may be to go on defense by blasting out discounts, the better move would be to figure out how to reach your customer in a meaningful way.

“People will be tightening up their wallets, that may be true,” Simeon Siegel, managing director at BMO Capital Markets, said in an interview. “But, even if the reality is that store traffic is nil because people are not allowed or are unwilling to go into a store, that’s different from brands being able to continue to tell their story.”

What exactly that story is depends on many things, including a brand’s values, leadership, willingness to break the rules and ability to have some perspective. It can vary by a retailer’s category or its customers’ expectations. But how it’s told could be more important than raw sales numbers during this time, according to Matt Sargent, principal at consumer insight consultancySargent Up North.

Latent demand can’t be met because people can’t go to stores to get what they want, and shopping is difficult even for what they need. As merchandise piles up, the classic response is to discount it to get it out the door. But people aren’t looking for deals at the moment, Sargent said.

“Those that are truly concerned about saving money are not buying anything because they’re thinking, ‘How is the rent going to be covered, how’s the mortgage going to be covered?'” he said. “And the segment of the population that still have gainful employment, their headspace isn’t in consuming, their headspace is in doing the right thing. Right now, the biggest disaster is not that you’re going to miss volume in the second quarter. The true disaster​ is you strike a tone that seems out of touch with consumers’ reality. All the tools of retailing have been thrown out the window.”

Survey after survey has found that even in the age of social media, customers value email communication from brands, but right now there are a few new rules. “Turn off your automated emails,” Gabor advises, providing some “don’ts” based on emails she’s seen. “Don’t try to sell. Brands have to serve their own communities, your employees, your customers. In the message from the CEO, don’t call it a ‘vacay.’ If you’re going to offer discounts, don’t call it the ‘COVID’ coupon.”

Furthermore, short-term sales that “end at midnight!” are unhelpful at a time of mass furloughs and layoffs, and panic-buying and hoarding, she warned. “That creates artificial scarcity,” she said. “Don’t create artificial scarcity when there’s real scarcity.”

Better to take the tack of Sharon White, chief of U.K. retailer John Lewis, who shared a video by email detailing the company’s efforts, and showed up to stores to chip in herself, according to Saunders. Or Abercrombie & Fitch Co. CEO Fran Horowitz​, who in emails to customers (and posted on its site) expressed concern for those affected by the outbreak and stated that the company had taken its cue from health officials in moving to protect its workers and customers, he said.

“You can see her personality coming through, and you think ‘what a nice lady,’ but, of course, she is a nice lady, and she behaves like that in her business,” Saunders said. “If you have a business run by a good, charismatic person, of course you have that filter through the brand.”

A slew of brands and retailers, including LVMH, Nordstrom, Ralph Lauren, Gap Inc., Ikea, Nike and others have retooled their factories or turned to their vendors in order to provide masks, sanitizer and other needed equipment, including for medical workers on the frontline of the pandemic.

Small businesses, which face particular strain at this time, have similarly pivoted to use their resources to help out. Portland, Maine, restaurant Woodford F&B, with the help of donations, is taking orders to feed healthcare workers and shelter employees. Gabor described an Austin, Texas, dry cleaner, who, with little to do now that people don’t need clothes for work or social events, has dispatched his delivery vans to help with essential services and whose customers can order free laundry services for healthcare workers.

Those local efforts often seem especially authentic because they are, with actions taken by the owners of the business, Saunders noted. But that ethos is important for every business, he said. “A social conscience has become more vital, how you’re serving the community, or the country or the world as a whole,” he said. “That separates the great brands from the ones that are alright but don’t really get it.”

REI demonstrated the value of this a few years ago when it made the counterintuitive move to shut down on Black Friday, encouraging customers and employees alike to spend the day hiking instead.

Online shoe seller Zappos, which may be in better shape than retailers dependent on physical locations, has made the unusual move of opening its customer service line to questions on, well, anything, including those uppermost in people’s minds right now.

Common questions these days are less about shoes or returns, and more about Netflix and book recommendations, help with homework for children, assistance finding local sources of newly necessary home equipment like barbells and for a few single parents, even just the chance to speak to another adult, according to Brian Kalma, Zappos​ “Entrepreneur in Residence.” The company is working to add text and email, he said.

The hotline staff had already been trained to deal with urgent calls that require medical or emergency intervention, because such calls have always come in, he explained by phone. But the idea to advertise that the company is open to off-topic requests was raised by more than one employee. “It’s a culture thing. There’s a type of person that Zappos tends to attract as an employee, so it sort of felt like a no-brainer,” he said. “The entire world is going through something, including us as employees. This isn’t so much about customers as it is about people, so it was easy to rally around that.”

It’s an example of how to use resources at a slower time, Sargent said. And it’s not complicated, yet very effective, according to Saunders.

“It comes down to being human and understanding what’s going on in people’s lives, thinking about real people,” Saunders said. “It sounds really simple and yet that is what it does come down to.”

That includes erring on the side of veracity and conscientiousness at this time of high anxiety around the spread of a novel virus that is yet to be fully understood by medical science. Trader Joe’s, for example, took the bold step of informing customers that a Seattle store employee had been diagnosed, urging them to take precautions and possibly get tested themselves. The company closed the store for a thorough cleaning and explained the steps to be taken before reopening.

“I think customers appreciate that level of transparency,” Sargent said. “That’s what Trader Joe’s has to do, is keep that engagement with customers a two-way street.”

Have a strong brand in the first place

Like Zappos, Trader Joe’s benefits from longstanding trust in its brand. The grocer’s vibe comes partly from quirky marketing, but also from its friendly employees.

That manifested recently at a Scottsdale, Arizona, store, where (as reported by GlobalData’s Saunders on Twitter) an employee, who was managing a long waiting line, admonished customers not to forget to have a little fun once they finally got in.

“Trader Joe’s is a company where employees feel very empowered to have their own personalities, to make decisions for customers and set their own standards,” Saunders told Retail Dive. “Because they are enabled, they don’t need a script with what to say, everything there is already aligned. These are the brands that are really shining because actually that niceness, that dialogue, that interaction is so important. It’s genuine and authentic customer service, and those retailers that weren’t great about it before are going to stick out like a sore thumb.”

However, that comes from not just good training of employees, but also adequate compensation and good treatment at work, according to Gabor. That stands in stark contrast to stores that have been adamant about staying open when they could have or even should have closed, for the sake of both employees and customers, she said. Or those that rely on part-time help who don’t receive a living wage or critical benefits like health care, according to her and others.

While Trader Joe’s does tend to offer some of the best wages and benefits in retail, some of its workers are asking for firmer sick leave policies and hazard pay during the COVID-19 crisis, including those working to form a union to those ends, according to a recent Grocery Dive story, which also noted the grocer is “ahead of the curve” compared to other retailers still open during the pandemic.

“The decision about opening is important, and as retailers make these decisions they need to think three-dimensionally,” Gabor said. “Right now, it’s people over profits, and what is the long-term impact to my brand over short-term sales? We’ve come to expect good behavior from brands. In the absence of good leadership elsewhere, the people are looking for leadership from the brands they love.”