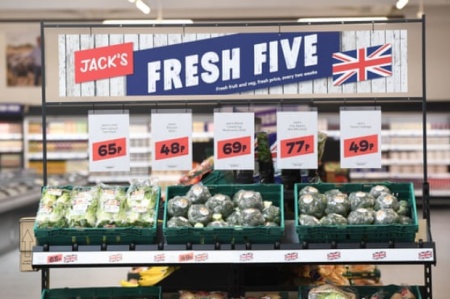 Tesco has unveiled its new discount chain called Jack’s that aims to tackle the rising threat posed by German rivals Aldi and Lidl.

The first store is in a mothballed former Tesco store in Chatteris, Cambridgeshire.

Another outlet in Immingham, Lincolnshire also opens on Thursday.

Between 10 and 15 stores are planned for new locations, next to existing Tesco stores, and a small number of converted Tesco stores.

Tesco is investing between £20m and £25m in Jack’s, which Mr Lewis described as “very, very modest”.

Although Jack’s is “part of the Tesco family”, Lawrence Harvey, the former Aldi UK executive in charge of Jack’s, said it will not issue or accept Clubcard points. Neither will there be any online operation.

As well as the discounters, Tesco faced being overtaken as the UK’s biggest supermarket chain by a combined Sainsbury’s and Asda.

The £15bn merger will be the subject of an in-depth competition investigation, the Competition and Markets Authority announced on Wednesday.

Mr Lewis said that beyond the initial 15 stores, more could follow, but that was “not a calculation we’re currently making”.

One Jack’s store will be set up next to a larger Tesco supermarket to see how consumers shop.

The Tesco boss said he was not worried about the new chain cannibalising sales from Tesco outlets.

Five will be rebranded Metro stores, which are larger than an Tesco Express but smaller than its supermarkets.

Only two will come from stores mothballed in 2014-15 when Mr Lewis took over as chief executive, while the remainder will be new.