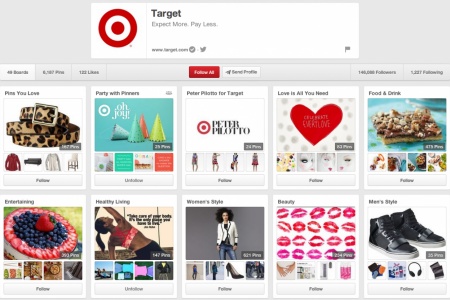 Target has tapped Pinterest to soup up its flagship app with the social network’s visual-search technology, Lens.

“As part of this multi-year deal, Target will significantly scale their media investment with Pinterest to reach more consumers who are interested in their products and drive them to purchase,” a Pinterest spokeswoman said Monday.

By adding Lens to its app, Target is hoping to make it easier for shoppers to explore, discover and buy products.

“For example, a customer can take a picture of a product that interests them in the store or elsewhere and discover similar products available to buy at Target,” the spokeswoman said.

This is the first integration of Lens into a retail environment, and Target is currently the exclusive retail partner for the feature in the United States.

Brands without a presence on Pinterest are doing themselves a disservice, recent research suggested.

Pinners who actively engaged with an advertiser’s content on the network had a 40% larger shopping cart at checkout, according to analysis of three brand clients by real-time information provider Neustar.

Beating out impressions, image close-ups and re-pins, the analytics firm determined “clicks” were the best indicator of a future sale. Indeed, clicks provided retailers with 500% lift in sales.

Investors continue to watch for signs that Pinterest is preparing to go public. Fueling their interest, the company recently brought on Todd Morgenfeld, formerly VP of finance at Twitter, as its first CFO.