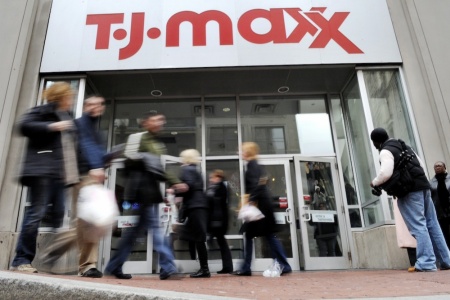 Although Herrman didn’t give a timeline for those store openings, the company added 47 stores in its fiscal first quarter of this year and plans to add about 150 more stores the rest of this year. That already represents about 5% growth.

TJX opened 219 store last year, and it is not planning on closing any stores this year.

And the company is considering even more store opening plans beyond the 5,600-store target.

One way that the company plans to grow the number of stores is to snap up bargains for buildings that other retailers have closed.

Store closings are a growing trend among retailers, as shoppers turn more to online purchases at e-retailers, such as Amazon (AMZN, Tech30). An improving labor market has also forced retailers like TJX to raise the salaries of its store employees, making it more difficult to keep locations with weaker sales profitable.

And that doesn’t even consider retailers which have been closing stores recently due to bankruptcy filings, such as Sports Authority, American Apparel and RadioShack.

ShopTalk 2016 Trends: The traditional apparel industry into a new era