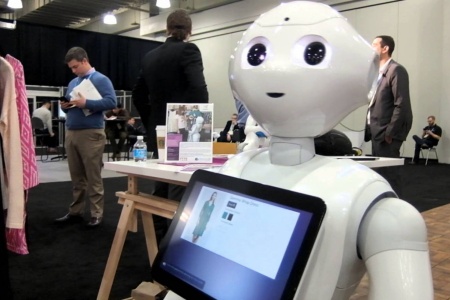 Starship’s rolling bots will start invading the streets of Washington, D.C. during a test run this fall. Earlier this year, D.C. became the first U.S. city to approve of ground-based electronic personal delivery devices. The robots can operate completely autonomously, and their contents are protected with a password provided to the recipient.

The product of Skype co-founders Ahti Heinla and Janus Friis, Starship aims to provide a quick, inexpensive, on-demand delivery service, especially for food and groceries. In central London, delivering a package on demand currently runs around $15 for the customer.

The startup’s little bots, which are about the size of an Igloo cooler and can hold up to 40 lbs. of goods, are capable of going up to 10 mph–which is also the maximum speed allowed under Washington’s law–but for now will be set to go around 4 mph. As they travel, they’ll communicate information about their route to help the entire fleet learn more quickly.

Starship said in July that its robots had traveled close to 5,000 miles and encountered over 400,000 people without a single accident. It claimed that during testing, about two-thirds of people ignored the bots entirely, while the rest reacted to them mostly favorably, often by snapping photos. The robots are programmed to avoid collisions with inanimate objects as well as people and pets. Of course, people and pets aren’t programmed to avoid collisions with the bots.

A very similar scenario ended poorly in the past, when a friendly hitchhiking robot thrived for months in Europe before arriving in the U.S. and promptly getting the ever-loving robotic crap kicked out of it. That’s the trouble with unattended bots on the streets–what’s to keep vandals from bashing one of these things up or thieves with lots of upper body strength breaking their way in?

Still, that doesn’t mean it’s not worth trying. Several companies, most notably Amazon, have been attempting to rethink the delivery process using drones, but strict FAA regulations have generally made that difficult in the United States. Automated rolling robots would face far fewer restrictions.

Starship’s bots can travel about two to three miles from their original destination. They operate with nine cameras that feed back to a central hub, and though they’ll be fully automated, a driver can take over control of the bots if needed.

And Washington’s bots might have company soon. Earlier this week, Starship began testing its robots on the streets of San Francisco.