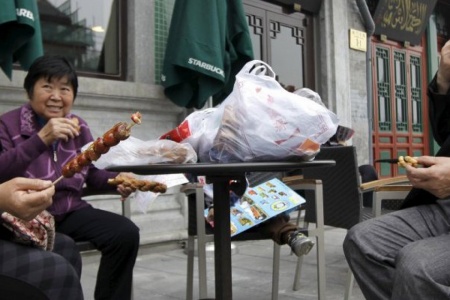 Starbucks Corp. is raising its bet on Chinese consumers’ taste for coffee, despite global jitters over the country’s slowing economy and market turmoil.

Chief Executive Howard Schultz said in an interview that he is bullish on the world’s most populous country, and the Seattle-based coffee giant, which already runs 2,000 stores in 100 Chinese cities, plans to open 500 stores in China every year for the next five years.

“We have confidence in the future of the Chinese economy, despite all the rhetoric, noise and issues,” said Mr. Schultz, who is visiting China this week. “People are looking for reasons not to believe. I’m on the ground and I see firsthand. I am bullish.”

Starbucks has continued to grow in China even as sales have fallen for some other foreign food-and-beverage companies, such as Yum Brands Inc., owner of the Pizza Hut and KFC franchises, and chocolate maker Hershey Co.

Starbucks posted its best fourth-quarter earnings globally last year. But same-store sales growth in the China and Asia-Pacific region, at 6%, trailed the 8% global rise and missed analysts’ estimates of 9.6% growth.

Companies are relying on wealthy and middle-class customers for expansion, but as China’s economy slows, so will the growth of their customer pools, said Andrew Polk, an economist at the Conference Board industry-research firm.

Starbucks doesn’t break out its China sales. Fourth-quarter revenue for the China and Asia-Pacific region more than doubled from a year earlier, to $652.2 million.

Mr. Schultz said he expects China to become Starbucks’s largest market, though he didn’t specify a time frame. The company operates more than 23,000 stores world-wide, including roughly 7,000 in the U.S. Starbucks’s Americas market, which includes Brazil, Canada, Puerto Rico and the U.S., accounted for 14,800 stores in 2015.

In China, a nation of tea drinkers, the coffee culture has exploded in recent years, especially in cities—where customers will pay about $5 for a cup. The potential untapped market remains huge: At 4.5 billion cups a year, according to data from Euromonitor International, consumption in China is a small fraction of the 133.9 billion cups a year drunk by North Americans. Euromonitor forecasts Chinese coffee consumption rising 18% annually to 2019, far outpacing U.S. growth of 0.9%.

Mr. Schultz is among the consumer-focused corporate executives who are shrugging off the global turmoil sparked by China’s volatile stock market and the country’s decision to weaken its currency.

KK Chua, president of the Asia division of U.S. cosmetics company Mary Kay Inc., said he isn’t perturbed and aims to expand the direct-selling company’s business across China. “The Chinese market is far from saturated,” Mr. Chua said. “Instead, we can see more potential.”

But China’s economic slowdown has pummeled other sectors, including manufacturing and raw-material production. Caterpillar Inc. executives warned in October that sales of the company’s heavy equipment would fall in 2016, partly because of weaker demand in China.

Even within the consumer sector, some have struggled. In October, chocolate company Hershey blamed China’s slowing economic growth for its woes in the third quarter, when its sales in the country fell 14%. A spokesman for Hershey said Chinese consumers are making fewer trips to the grocery store, which has hurt business. Hershey is now expanding its sales online, he said.
Yum Brands cut its 2015 earnings outlook in October, partly in response to sluggish sales at its Pizza Hut and KFC outlets.

But for those catering to the country’s growing upper middle class, business has remained surprisingly good.

Observers say consumer demand—which China’s economy is pivoting toward as it shifts away from investment-driven growth—won’t be derailed by the battered currency and stock markets.

“The risk of contagion into the consumer economy is small,” said Jeffrey Towson, an investment professor at Peking University’s Guanghua School of Management.

Companies aren’t recording the sharp sales gains they did in previous years and are having to work harder as competition increases, but not all are suffering or expecting consumer demand to fall off, said Ben Cavender, a senior analyst at Shanghai-based consultancy China Market Research.

Mr. Schultz said Starbucks will also begin this year to invest millions of dollars to give about 10,000 baristas and store supervisors a stipend that covers at least 50% of their housing costs in China. The housing allowance is adjusted for cost of living and will vary by city, a Starbucks spokesman said.