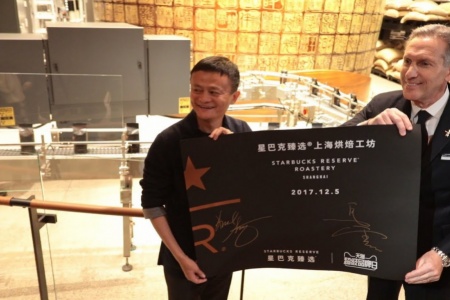 Starbucks Corp. will be joining forces with Alibaba Group Holding Ltd. to begin delivering its drinks and baked goods in China, according to people with knowledge of the plans, rolling out an effort to stave off competitors and turn around sales in the country.

Ele.me, the meals delivery service owned by Alibaba, will handle the logistics in a deal that will be announced Thursday, according to the people, who asked not to be named because the information is not yet public. Starbucks last week said it plans to start deliveries with a partner this fall in Beijing and Shanghai.

A Starbucks representative said it doesn’t comment on speculation. Alibaba said the company and Starbucks are “always exploring new ways to deepen our long-term partnership in China.” The two companies partnered to make visits to Starbucks’ Roastery high-tech store in Shanghai interactive.

Starbucks is coming to the delivery game late as it faces a rare sales decline in the world’s second-biggest economy. The company has said it aims to establish itself as a daily routine for tech-savvy consumers in China, which the company expects to surpass the U.S. as the company’s biggest market within a decade.

“Delivery as a whole is becoming a lifestyle ritual in China, and consumer behaviors are changing,” Belinda Wong, chief executive officer of the chain’s Chinese business, said on a conference call last week.

The tie-up will extend beyond deliveries, according to one of the people, without elaborating. The partnership will also not be exclusive, and Starbucks’ tie-up with Tencent on mobile payments and social gifting is unaffected, the person said.

The coffee chain would be the latest to jump onto the delivery bandwagon in a country where everything from fresh produce to forklifts can be purchased online and shipped the same day. China’s vast sprawl has proven a challenge. The company’s responding in part to competition in urban areas from the likes of local chain Luckin Coffee.

The American giant gains a valuable ally in ele.me, which commands hundreds of thousands of delivery personnel on a daily basis across China and is syncing that logistics network with its e-commerce parent to enhance efficiency. Alibaba co-founder Jack Ma’s Ant Financial is another of the startup’s backers, granting Starbucks access to the country’s leading mobile payments network and — potentially — a rich source of consumer data.

Starbucks reported a comparable-store sales drop of 2 percent in its most recent quarter in China, trailing analysts’ estimates. The chain aims to triple its revenue in China over the next five years. It plans to operate 6,000 stores in 230 cities on mainland China by the end of fiscal 2022 — a rate of a new store every 15 hours.