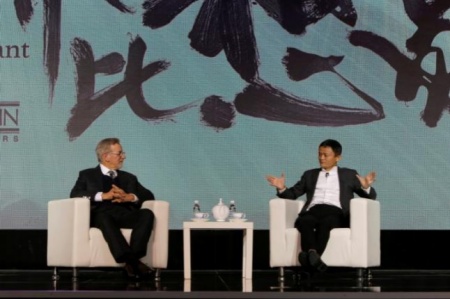 The two companies will also collaborate on the marketing, distribution and merchandising of Amblin Partners films in China, the world’s second-largest movie market. Following the stake purchase, Alibaba Pictures will have a representative on the Amblin board.

Hong Kong-listed Alibaba Pictures is an emerging movie powerhouse with businesses ranging from investment and financing, content sourcing and production, promotion and distribution, as well as cinema services. It also has partnerships with other Hollywood studios such as Paramount Pictures and Skydance Media on a project to project basis. The tie up with Amblin is the first strategic partnership that will enable Alibaba Pictures to become a stakeholder in a Hollywood company.

“The partnership is the first of its kind for both Amblin Partners and Alibaba Pictures and marks an important milestone in our globalisation strategy to reach Chinese and global audiences alike,” Alibaba Pictures chairman Shao Xiaofeng said during a press conference on Sunday in Beijing.

“We will also leverage Alibaba Group’s ecosystem as a channel for Amblin Partners’ films to reach hundreds of millions of Chinese consumers.”

Alibaba Pictures declined to reveal financial terms on the size of its stake in Amblin, or any specifics on the number of films on which they will collaborate.

The new deal adds to a string of Chinese ventures with Hollywood and foreign studios in a bid to gain market share in China and acquire Hollywood filmmaking know-how.

Tencent Pictures last month teamed up with Turner Asia-Pacific to develop Tuzki, an animated movie which is part of a slate of 21 film and television projects currently under development by Tencent’s film production arm.

Wanda Group is partnering with Sony Pictures under an agreement wherein Wanda will market Sony Pictures’ films and co-finance some upcoming movie releases of Sony Corp’s film unit in China. In January, Wanda paid US$3.5 billion for a controlling stake in US film studio Legendary Entertainment.

Alibaba Pictures began investing in Hollywood films in 2015 with a stake in Mission: Impossible – Rogue Nation, in cooperation with Skydance. It was also an investor in this year’s blockbusters Star Trek Beyond and Teenage Mutant Ninja Turtles: Out of the Shadows. Alibaba Pictures will also distribute The BFG, a film directed by Spielberg that will be screened in China from Sunday, the first concrete cooperation between itself and Amblin.

Highlighting the importance attached to the partnership, Alibaba Group’s executive chairman Jack Ma and Spielberg both attended the press conference.

However, the collaborations between US and Chinese film companies comes at a time when China’s cinema market has seen a sudden cooling since the second quarter. Growth in China’s cinema box office receipts grew 13 per cent in the first eight months of the year, according to industry consultancy Entgroup. That’s down sharply from last year when box office takings jumped 48 per cent on year. Mainland China cinema ticket sales have averaged an annual growth rate of 36 per cent for the past 10 years.

The slowdown makes it impossible for China to surpass the US as the world’s largest film market in terms of ticket sales this year.

Industry experts attribute the sudden cooling in growth to a winding down of generous subsidies for distributors and online ticket companies, and a dearth of quality films.

Google to open a physical shop in New York

Ikea ready to open its first store in India