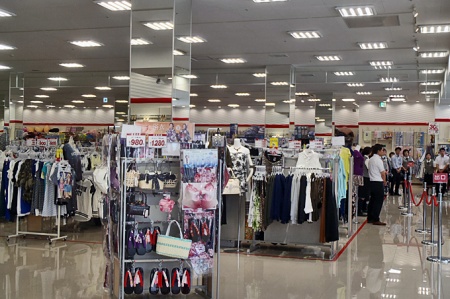 Shimamura employs no fashion designers or celebrity models. Most of its 2,000 outlets are in residential neighborhoods, rather than on upscale shopping strips. Its merchandise — including 1,140 yen ($10) cardigans and 900-yen skinny pants — are mainly sourced from low-cost manufacturers overseas.

That code has been especially successful in helping the company expand sales in Japan even as household spending fell in 11 of the past 12 months ended September and consumer prices fell for a seventh straight month.

Shimamura shares have fallen about 3.1 percent in the past year through Nov. 18, compared with a 15 percent drop for Fast Retailing. Shimamura stock gained as much as 1.5 percent in Tokyo Monday.

Revenue increased an average of 6.2 percent the past three quarters, beating the 5.4 percent average of Fast Retailing, whose annual sales are three times larger. The retail giant’s billionaire chairman Tadashi Yanai is pledging a shift to “lowest possible prices” for its Uniqlo casual-wear stores, and has turned to lower-priced brand GU as his company’s second pillar of growth.

Fast fashion chains that target younger customers are facing challenges in Japan as the population ages, while rising data costs for mobile phone-totting teenagers means they have less money to splurge on fashion, said Nonaka, who has been with Shimamura for more than 30 years. “But a company like us selling goods at low cost is impacted less,” he said.

Shimamura opened its first Tokyo store in 1978, a quarter century after it started in Saitama prefecture in 1953. The retailer added more stores throughout Japan from 1990 and had 2,000 Shimamura and other branded outlets by the end of 2015.

That expansion has taken Shimamura’s share of Japan’s apparel market to 4 percent, eclipsing World Co. in 2011, but still trailing Fast Retailing’s 12 percent, according to Euromonitor International.

Shimamura’s net income surged 46 percent to 16.7 billion yen in the six months ended Aug. 20, beating its own guidance of 14.8 billion yen, the company said on Oct. 3. It reiterated a forecast for full-year operating profit of 46.2 billion yen, a 15.8 percent jump from a year earlier.

Earnings have been helped by a stronger yen, which makes it cheaper for Japanese companies to buy good overseas. The yen strengthened against all major Asian currencies this year and is up 15 percent against China’s yuan.

Investors and analysts have noted the stark contrasts between Shimamura and its rival, Uniqlo.

Shimamura is looking to acquire businesses in product categories where the chain is lacking.

Why Ikea is using solar rooftops to 'green' its supply chain