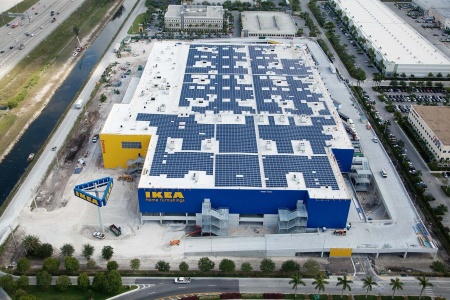 he Swedish retailer’s goal is to produce as much renewable energy as it consumes by 2020, an ambitious goal which requires active collaboration with suppliers and logistics providers to curb emissions while investing in renewable infrastructure within its own operations.

The retailer’s 2015 sustainability report reveals the various efforts the retailer is engaging with to reduce emissions at every step of the way. The efforts include using more sustainable packaging, encouraging more recycling efforts, collaborating directly with suppliers on sustainability goals and creating sustainable procurement policies.

But as recent news show, reaching 100% renewable consumption requires not just reducing emissions but also investing in infrastructure to produce renewable energy. For this, the company’s warehouses and retail stores will be an important part of the plan.

Since 2012, the company has expanded its solar capabilities by 27% to produce 109GWh, allowing both its distribution centers and stores to produce more than 50% of its electricity consumed on-site. Most of the company’s renewable will be sourced from biomass and wind turbine production, but its investments in distribution centers ensure every link in the supply chain is carrying its weight in sustainability.

Shimamura, One Fashion Brand Is Beating Uniqlo at Its Own Game?