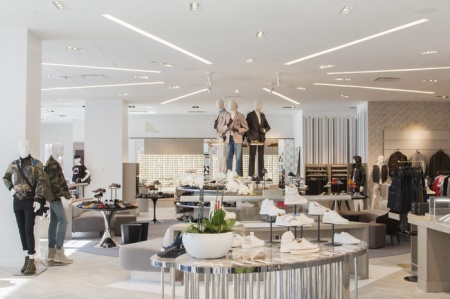 Designed in collaboration with Casco, the Saks men’s store stands at
nearly 17,000 square feet, housing luxury designers such as Saint
Laurent, Lanvin, Dries Van Noten, Moncler and Off-White and contemporary
brands such as Paul Smith, Ami and Officine Generale. Saks is
also hosting a pop up devoted to footwear at the new store, offering
over 200 brands including Fendi, Givenchy, Margiela and up to 40 brands
exclusive to Saks. The pop up will rotate monthly featuring a new
concept and exclusive collaborations. New features also
available at the store include a Tech Bar for new gadgets and
accessories, Sharps barber shop, an in-house leather spa for footwear
treatment and a Fika coffee bar. In addition, Saks is offering a
made-to-measure service at the new location. The men’s store
joins Saks’ 86,000-square-foot women’s store at Brookfield Place. The
store opened in September 2016 along with the opening of the
development. Saks also opened the 10022-SHOE store in Greenwich, CT, the
first standalone footwear store from the retailer, an anchor store at
Brickell City Centre, and a 14,000-square-foot contemporary brand store
named The Collective also in Greenwich. 10022-SHOE and The Collective will be joined by The Vault, a jewelry store, in May 2017.

IKEA and other projects coming to Texas city

Fast-fashion retailers are looking to Vietnam