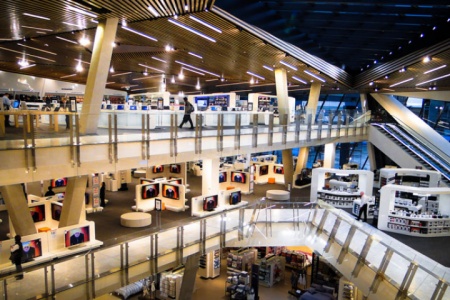 Retailers are filing for bankruptcy at a record rate as they try to cope with the rapid acceleration of online shopping.

In a little over three months, 14 chains have announced they will seek court protection, according to an analysis by S&P Global Market Intelligence, almost surpassing all of 2016. Few retail segments have proven immune as discount shoe-sellers, outdoor goods shops, and consumer electronics retailers have all found themselves headed for reorganisation.

Meanwhile, America’s retailers are closing stores faster than ever as they try to eliminate a glut of space and shift more business to the web. S&P blamed retailer financial struggles on their inability to adapt to rising pressure from e-commerce.

Urban Outfitters chief executive officer Richard Hayne said as much on a conference call with analysts last month. There are just too many stores, especially those that sell clothing, he said.

Jim Elder, S&P Global Market Intelligence’s director of risk services, wrote that first quarter results suggest there’s no quick recovery in sight. Sears Holdings Corp., Bon-Ton Stores Inc., and Perfumania Holdings Inc. are among the most vulnerable in the coming year, according to an S&P analysis of public retail companies.

Department stores, electronics retail, and apparel shops are at highest risk, according to S&P. The food and home improvement segments are safest.

Apparel retail has been particularly hard hit, with The Limited, Wet Seal, BCBG Max Azria, and Vanity Shop of Grand Forks each seeking court protection in 2017. The latest victim was Payless Inc., which filed for bankruptcy April 4 and said it would shutter 400 stores.

Rue21 may be next. The embattled teen apparel chain is said to be filing for bankruptcy as soon as this month, according to people familiar with the matter. Or perhaps it will be Gymboree, which Bloomberg News reported is preparing to file for bankruptcy as a June 1 debt payment looms.

A dire warning about the retail apocalypse