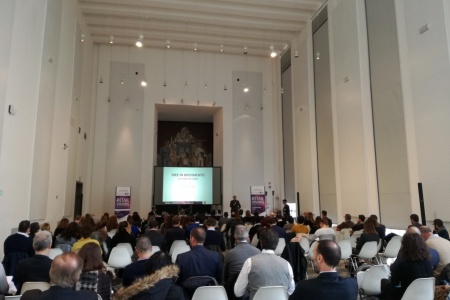 Retail Visions is one of most important and long-awaited events organized by Retail Institute Italy.

This annual conference represents an opportunity to discuss and analyze the correlation between Retail Design and Visual Merchandising, through interactions from current experts in topics related to architecture, design and development of companies.

The event started with an introduction by Marco Turinetto, Professor at the Politecnico of Milan, who spoke about the evolution of retail sector in this last years and how retailers can deal with it.

Later, Claudio Baitelli, General Manager at Librerie Feltrinelli, explained the secrets of  the new concept RED Feltrinelli and the key role of elements as value proposition, layout and entertainment.

After the break, Michele Rossi, Business Unit Manager at Under Armour, described the Under Armour retail experience thought the locations opened at Oriocenter (Bergamo) and the first Italian flagship store opened in Milan.

At the end, Mattia Longhin, Lab Visual and Designer at Pinko spoke about the exclusive “The Pinko Store Experience” applied in many locations around the world and characterized by a unique store design, a representative visual merchandising and original window displays.

How Mars and Walmart illustrate the future of sustainability