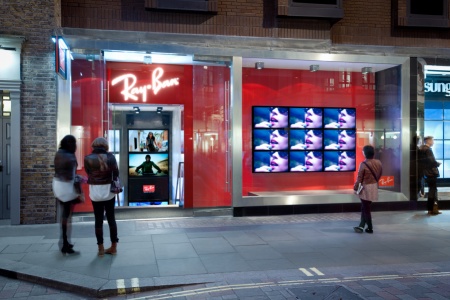 The 850 sq ft store is intended to be “a celebration of the brand’s creative spirit and commitment to offering customers the world’s best eyewear shopping experience.”The news comes as Daniel Wellington, the Swedish watch brand with a strong celebrity following, has also just opened a new Carnaby Street store at number 24. The shop covers 800 sq ft.Shaftesbury’s head of retail Samantha Bain-Mollison said that both brands “complement the fashion forward direction of Carnaby and the importance of strong accessories brands in the area shown through recent openings [of] Swatch and Finlay & Co.”And there’s no denying that Carnaby Street has become more of a footwear and accessory destination in recent years, especially in the activewear and premium areas.It has also moved gradually upmarket, evolving from its low-end image of not so many years ago to becoming a middle-market destination and now a higher-end one.And this migration to the higher end is a testament to Shaftesbury’s careful curation of its properties. A similar effect is also being seen in another major area where it’s the dominant landlord, Seven Dials. Adjacent to Covent Garden, it’s becoming a beauty and indie hub with an increasingly upscale profile.