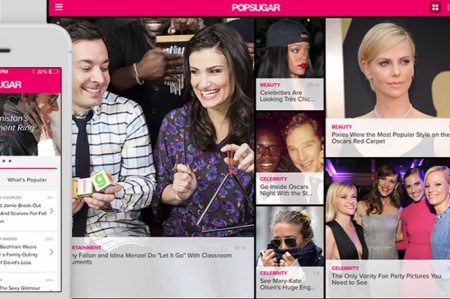 The female-focused content company has already built a sizable affiliate marketing business through ShopStyle, which serves as a specialized search engine for women’s apparel and accessories. The product, which PopSugar Inc. acquired in 2007, was responsible for driving $1 billion in revenue to its retail partners last year, according to Brian Sugar, PopSugar Inc.’s founder and chief executive.

Starting in April, ShopStyle won’t just redirect shoppers to complete purchases on retailers’ sites. Instead, people will be able to fill out a profile, enter their credit card information, and make purchases from dozens of retailers directly through the ShopStyle site and app.

Essentially, ShopStyle wants to evolve from serving a role akin to Kayak—which helps people find deals across multiple airline websites—to that of iTunes, but for apparel. To facilitate this evolution, PopSugar Inc. purchased the mobile shopping technology firm Cosmic Cart in November.

To date, when people search for products on ShopStyle and make purchases on other sites, PopSugar Inc. takes a roughly 15% cut of each transaction. That revenue sharing arrangement won’t change with the new product, but the company believes that the more people who sync their credit card information with ShopStyle, the more purchases they’ll complete from partners like Target, Express and Topshop. That means more money will flow to PopSugar Inc..

PopSugar Inc. plans to promote the new ShopStyle Checkout on its own site, and the product will be enabled on a network of 14,000 partner blogs and niche websites. The benefit for consumers is that they’ll be able to shop for products from Nicole Miller and Neiman Marcus and not have to jump from ShopStyle to these companies’ sites or apps to complete purchases.

That potential for convenience is a big deal in mobile, explained Mr. Sugar, who said that consumers complete mobile purchases at one-third of the rate they do following desktop searches on ShopStyle, primarily due to friction in the checkout process. Customers can avoid slow loading apps, or having to enter their address and credit card information on a mobile device. Currently, 71% of PopSugar.com and ShopStyle’s traffic comes from mobile devices.

“Mobile shopping has been a growth area for Neiman Marcus and we would expect to see improvements in mobile conversion with this solution,” said Wanda Gierhart, chief marketing officer at Neiman Marcus Group.

PopSugar’s push into mobile shopping comes as the digital media business grapples with its place in e-commerce. Many magazine brands have struggled to drive purchases from their websites. And recently, Thrillist.com announced plans to separate its editorial operations from its sister shopping brand JackThreads after previously blending the two businesses.

et, on the other hand, media companies like Gawker and Vox are experimenting with weaving shopping deals together with editorial coverage.

Mr. Sugar said the key for PopSugar Inc. has been to create a separate brand.

When someone visits ShopStyle.com or its app, “they have intent to shop,” said Mr. Sugar, who prior to launching PopSugar Inc. logged stints at JCrew.com and Kmart’s defunct e-commerce play Bluelight.com. “With content, [shopping can work] but the user intent isn’t the same,” he said. “We think there is an opportunity to become the iTunes or App Store of fashion and accessories.”

Of course, Mr. Sugar acknowledged that he’s potentially taking on giants like Amazon in this quest. “Amazon is an amazing company,” he said. “If you go back to the types of merchants that sell there, it’s great for commodity-based goods. Our brands are different.”

ShopStyle features 18 million products from over 1,400 retailers across the globe. Mr. Sugar said that ShopStyle reaches 18 million unique visitors each month, based on its internal data, and generates half a million shopping sessions each month.

Meanwhile, the decade-old PopSugar.com boasts of over 40 million unique users, according to comScore. The company pulled in $150 million in revenue in 2015, said a person familiar with the matter.