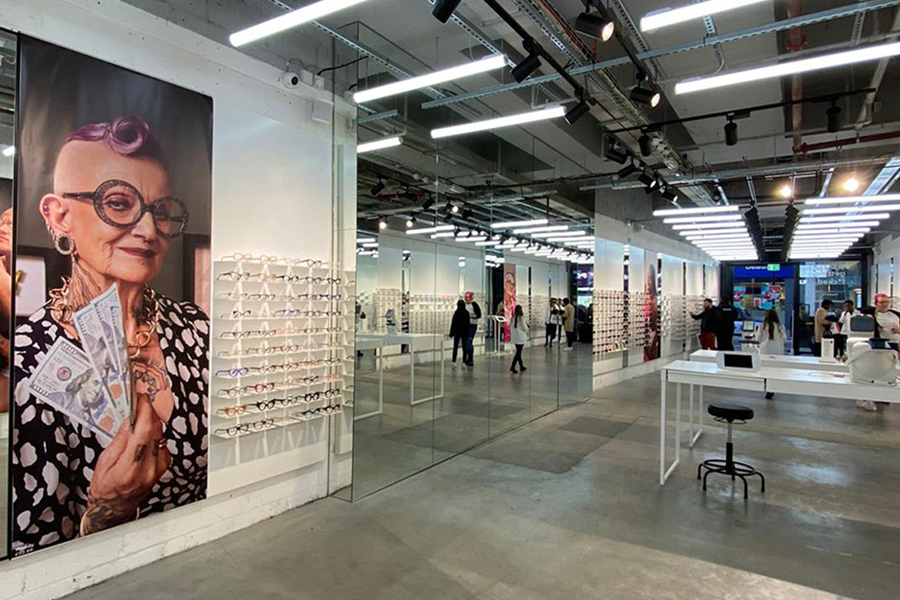 Dutch eyewear brand Polette opened a store on Oxford Street last month and the outcome is a store that has some elements in common with many indy glasses stores, but a fair amount that sets it apart from that norm.

A clue about the offbeat nature of the store is provided by the window. Rather than displaying multiple pairs of glasses, the eye is grabbed by a moving metal rod, powered by an electric engine, with half a baguette attached to its end (in other Polette stores previously the place of the baguette was taken by a sex toy).

Inside, this is a lot more showroom than shop, in spite of its location, and those wishing to make a purchase select from the perimeter displays and lenses, available in a variety of colours, are then inserted for collection or delivery at a later date.

Large colour graphics feature an old, but very stylish, individual of indeterminate sexuality, accompanied in a number of images by a muscleman sporting silver glitter hot pants. All of which makes this a somewhat unusual addition both to the area and to the manner in which glasses are sold.

Polette trades from four showrooms across France, two in the Netherlands and a single outpost in Belgium, as well as the UK ‘store’.