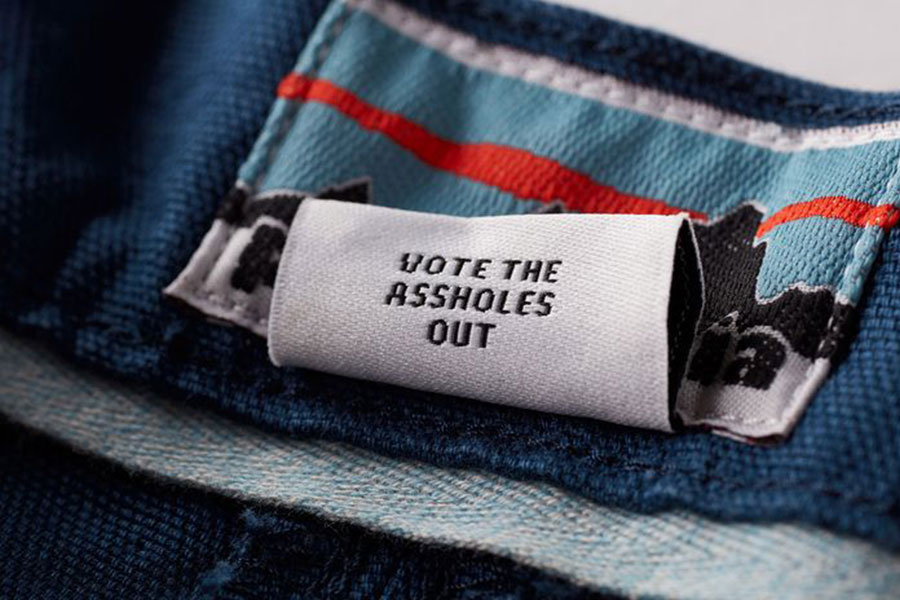 Patagonia’s history of political activism has taken a bold turn this fall. The outdoors brand made waves this week when “Vote the assholes out” messages were discovered on tags of several Patagonia garments.

A Patagonia spokeswoman confirmed the tags to be real and noted that they were added to a 2020 collection of Patagonia’s men’s and women’s shorts “because we have been standing up to climate deniers for almost as long as we’ve been making these shorts.” (Specifically, the line featuring the tags are the brand’s men’s and women’s “Regenerative Organic Stand-Up Shorts.”

She noted that Patagonia’s founder, Yvon Chouinard, has been talking about voting the assholes out for several years and by “assholes,” he means “politicians from any party who deny or disregard the climate crisis and ignore science.”

Amid raging wildfires on the west coast, President Donald Trump, who has made a habit of repealing environmental regulations, on Wednesday was quoted in the New York Times as saying “I don’t think science knows” what is actually happening.

Three years ago, Patagonia sued the Trump administration over the president’s downscaling of federal land protections of the Bears Ears National Monument in Utah. At the time, Patagonia.com was overtaken by a bold declaration in black and white “The President stole your land.”

On social media, Patagonia Director of Copy Brad Wieners has been vocal about the voting tags.

Outside of the shorts, Patagonia has also provided on its site resources for customers who want to vote for those supporting climate change. There, it presents a tamer statement, “Vote climate deniers out of office.