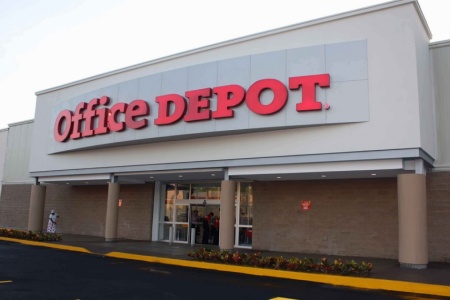 The company described the acquisition as the first step toward becoming a seller of business services and technology — rather than a traditional retailer of paper, pens and staplers, which are less in demand as offices go digital. It plans to put tech kiosks run by CompuCom in all of its 1,400 stores while also selling traditional office supplies to the service providers’ current customers.

“It’s going to be a big revolution in the retail space,” said Chief Executive Officer Gerry Smith, who joined the company in February from personal-computer giant Lenovo Group Ltd. “It’s a lot better alternative than us not doing anything. It’s an extremely important pivot.”

But the plan wasn’t enough to reassure investors, who see a glum retail landscape continuing to cloud Office Depot’s future. The shares fell as much as 20 percent to $3.66 on Wednesday, the worst intraday decline since Aug. 9. They had been up 1.5 percent this year through Tuesday’s close.

Smith said the decline in the stock shows that the company still needs to prove to shareholders that this is the right strategy. One of his goals for this deal to the company valued by Wall Street as more of a services provider than a retailer, which investors have soured on.

“We’re not looking quarter to quarter — we’re looking where are we going to win long term,” Smith said. “We’re very optimistic we’re going to change the value of the company with this acquisition.”

Office Depot’s sales growth has stalled, and the latest quarter hasn’t brought reason for optimism. The recent hurricanes and a slow back-to-school period both weighed on results, the company said on Tuesday. Same-store sales will decline 5 percent to 6 percent in the third quarter. Operating income will be $125 million to $135 million in the period.

CompuCom employs about 6,000 licensed technicians — the largest workforce of its kind in North America, Office Depot said. They provide software and hardware help to more than 5.1 million users at business clients.

Office Depot has been seeking a turnaround since a proposed takeover by Staples Inc. fell apart last year. After the deal was blocked by U.S. regulators, the company sold off foreign divisions and shuttered stores to cut costs. Though the moves have helped the retailer stay profitable, online competition and a broader retail slump have battered margins.

Staples, meanwhile, agreed to be acquired by private equity firm Sycamore Partners in June for about $6.9 billion.

The company expects the CompuCom deal to start adding to profits in its first year. Office Depot, based in Boca Raton, Florida, plans to finance the takeover with new debt and the issuance of about 45 million shares of its common stock.

The deal is expected to add about $1.1 billion in revenue and bring cost savings of $40 million within two years. The company also plans to gain synergy by selling CompuCom services to Office Depot customers.

Are hotels the new frontier in experiential retail?