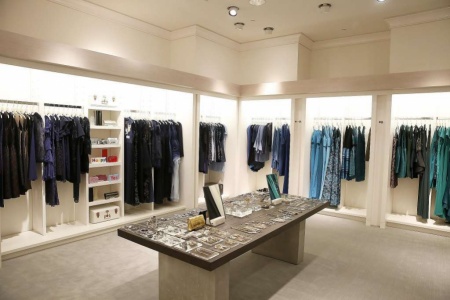 The 3,000-square-foot space will showcase a rotating selection of clothes and accessories that shoppers can rent, along with items from Neiman Marcus that customers can buy to complete their looks.

Neiman Marcus isn’t the first department store chain to look to e-commerce competitors for a boost. Rival luxury purveyors Nordstrom Inc. and Saks Fifth Avenue have combined online flash-sale websites with their brick-and-mortar off-price chains to bridge the gap between digital and physical.

Rent the Runway has raised $126 million in venture capital since it was founded by in 2009 by two Harvard Business School graduates, Jennifer Hyman and Jennifer Fleiss. It began as an online-only clothing rental service, then moved into physical space. By the end of the year, the company will have seven brick-and-mortar stores where shoppers can try on dresses and get styling help. The stores attract thousands of walk-in visitors each per week, the company said.

Neiman Marcus, which lost $407.2 million in its most recent quarter, is looking to drive more sales as mall traffic remains sluggish and consumer preferences change. The closely held company says today’s shopper wants to buy styles she sees on runways immediately, not several months later when the clothes typically appear in stores. Consumers also are buying apparel appropriate for the current season, rather than months earlier.

To cope with those changes, Neiman Marcus, whose average customer is 51 years old, wants to connect with younger consumers. The partnership with Rent the Runway exposes the retailers to the startup’s 6 million members, whose average age is 29. Rent the Runway says that when women rent fashionable apparel, it often leads to a later purchase.

Rent the Runway’s San Francisco shop within a shop is about six times as big as other branded stores inside Neiman Marcus, Hyman said. Historically, Hyman has had to soothe retailers’ fears that her model may cut into sales of full-price merchandise.

Trends Shaping the Future of Retail