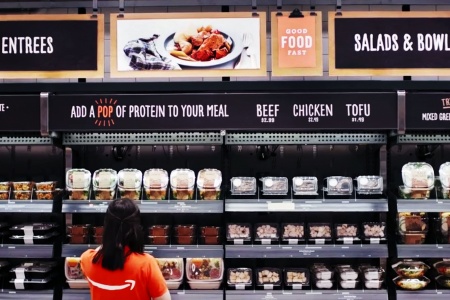 If Microsoft follows Amazon’s lead into the grocery business with technology that cuts out the cashier, it may revamp a previous, failed attempt at checkout-free shopping – a high-tech shopping cart. Redmond, Washington-based Microsoft is working on technology to eliminate checkout lines at stores by tracking what shoppers add to their carts. It has shown samples to retailers and talked with Walmart about a collaboration, and is working with other tech partners, sources told Reuters.AVA Retail, a Redmond-based start-up, said Thursday it is developing a check-out free technology based on camera sensors and artificial intelligence.Such technology would set up Microsoft to rival Amazon Go, Amazon’s custom-designed store that uses cameras and tracking technology to cut out the cashier.

Amazon has one store open in Seattle and plans to open more in Chicago and San Francisco.The challenge: An attempt at carts that tracked purchases was tried and found wanting in the past.“Cart-based (technology) is so old school – IBM tried that over 20 years ago,” said Phil Lempert, a grocery analyst who runs the Supermarket Guru website. “The problem is maintenance at the store level of the unit is too costly, and people kill the units by banging on them, trying to steal them.”Stores such as Kroger and Stop & Shop tested them, but they found most consumers used them as a calculator to add up how much they were spending, he said. Technology has evolved since 2000, so it could be time to try again. It’s certainly one way to deal with the No. 1 cost facing the grocery industry: labor.

As the push to raise minimum wages to $15 an hour moves across the country, supermarkets are looking at tech as a way to eliminate jobs so they can keep costs down and prices the same. “The money has to come from somewhere … consumer price hikes or lower costs,” Lempert said. In today’s environment both are difficult to pull off, especially for Amazon and Walmart, which have a difficult time raising prices, he said.Microsoft and Walmart both declined to comment.Carts, not camerasMicrosoft’s intentions – if realized – would add another tech giant in pursuit of revolutionizing the grocery business, marked by low profit margins, high staffing costs and a vast physical presence.

“Microsoft especially has an opportunity to leverage their technology prowess to not copy Amazon Go but instead go after the big prize – duplicate the Amazon Go experience in much larger retail formats such as supermarkets,” retail and supply chain consultant Brittain Ladd said.The U.S. grocery market is forecast to be worth $1.7 billion by 2022, according to IGD, a food and grocery research organization. Eliminating the need for cashiers would lower the business’s costs while threatening a category of blue-collar jobs. More: Amazon’s checkout-free Amazon Go stores coming to San Francisco and ChicagoMore: Amazon opens its grocery store without a checkout line to the publicMore: Amazon Go could be Amazon’s next big serviceAmazon’s high-tech approach, crafted by the company that’s most visibly changed how Americans shop in recent years, has suggested grocery shopping is on the cusp of its biggest breakthrough since bar codes. A cart-based technology would be less cost-intensive than Amazon’s system. To install a cart-based checkout system, the basics are new carts and some type of monitors at the exit.

That’s different from Amazon, which is purpose-building new Amazon Go stores with an array of cameras. All items must be bar-coded and, in the case of loose items such  as salads, must be premeasured so they have exactly the same weight and thus don’t require different price points.A cart-based system faces the same daunting difficulties other self-checkout systems have faced.Walmart, for example, launched a checkout-free pay service called Scan & Go last year in close to 120 stores, allowing customers to scan and bag. However, it canceled the program in May in Walmart stores, though it continues in Sam’s Club stores.Still, the potential market for tech companies that get their foot in the door is too huge to ignore. The U.S. grocery market is forecast to be worth $1.7 billion by 2022, according to IGD.