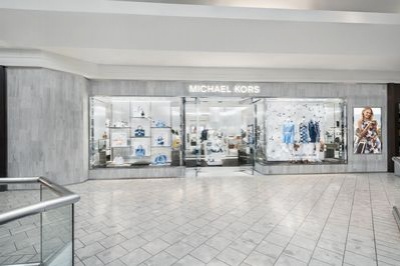 The company is revamping stores and training sales associates to deliver personalized style ideas that are handed down from Kors. Example: how to match a black-sequined-and-cheetah-print dress to a pair of calf leather sandals and a pouch for a cocktail party.

The goal is to win back customers with experiences — the current holy grail of brick-and-mortar chains. With Amazon.com Inc. and other e-commerce players encroaching on apparel, retail brands are scrambling to offer something that you can’t get with a mouse click.

The Michael Kors brand needs a boost after an overly aggressive
expansion led to years of flagging sales, heavy markdowns and slowing
customer traffic. The company has shuttered stores to help give the
business a more exclusive feel, but now it needs to show it can grow
again.

In addition to redesigning its shops and increasing its product catalog, it’s relying less on department stores — a channel that’s marred the brand by associating it with deep discounts. And Michael Kors plans to add the personalized recommendations to a new mobile app, which will be offered next year.

Investor interest seems to be rising: The value of Michael Kors shares has increased by about a third since the beginning of August. They surged 22 percent to $45.25 on Aug. 8 after the company reported profit and sales that exceeded estimates — largely by introducing new products and curtailing discounts.

The company wants to cut revenue generated from retail partners to 30 percent from about 40 percent in the last fiscal year. To achieve this goal, Michael Kors is selling less to department stores that have been battered by falling foot traffic and working to draw shoppers into its own stores. To entice them to pay full price, it has started offering a wider range of products and has stepped up advertising for new products such as Mercer and Italian-made Bancroft handbags.

Michael Kors also hopes glitzier stores will attract customers, and is using one located in an upscale mall in Short Hills, New Jersey as the template to follow. The 3,000 square-foot store recorded “strong” double-digit growth within three months of reopening, Idol said.

This bright spot amid a wider panorama of declining same-store sales has given the company confidence the format can be replicated as it revamps more than 100 stores over the next two years. Idol said the layout allows for quick reconfiguration so the stores can adapt to customers’ preferences. Additionally, as many as 125 underperforming stores will be closed.

The company also wants to diversify its revenue stream by selling fewer handbags — instead it will offer more clothing for both women and men, and smartwatches and shoes. The latter will be boosted by the company’s recent purchase of shoemaker Jimmy Choo for about $1.35 billion, including refinanced debt. Demand for handbags, which make up about 70 percent of Michael Kors’s revenue, has waned in recent years.

Competitor Coach Inc. has taken a similar track as it attempts to provide a wider range of goods, even changing its name to Tapestry Inc. to reflect its move to build a multibrand conglomerate.

Three Retail Brands That Should Inspire the Toys R Us Turnaround