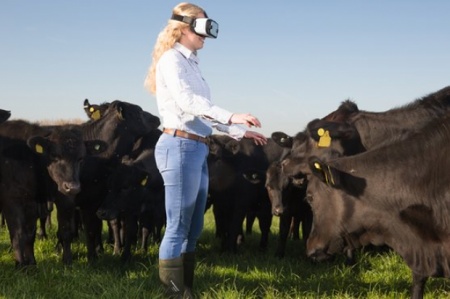 McDonald’s is to tour agricultural events around Britain with a roadshow that uses virtual reality to bring people closer to the fast food chain’s supplier farms.

The company will invite visitors to don headsets allowing them on to virtual farms, where they can drive a tractor and help harvest the potatoes for its fries. They can also go behind the scenes with a virtual tour of supplier farms producing eggs, milk and beef for McDonald’s 1,250 UK restaurants.

Technology developers, young farmers and experts from the leading agricultural university Harper Adams have been enlisted to create the roadshow, which McDonald’s hopes will reach up to 1 million people at farming shows and other events across the UK over the next year.

The “Follow our Foodsteps” experience will make its first stop at the Balmoral show, in Northern Ireland, for three days next week, and will also visit the prestigious Royal Bath & West and Royal Highland shows in June.

“As a nation, we have never been more focused on food,” said Connor McVeigh, director of supply chain at McDonald’s UK. “As one of the biggest customers of British and Irish farming, we want to lift the lid on the passion and skills that exist at every stage of the process, from farm to front-counter.”

McDonald’s is one of the biggest single customers of British and Irish farming – working with more than 17,500 farmers – but wants to help its customers better understand its supply chain while challenging outdated stereotypes in farming.

A YouGov poll of 2,000 consumers for the chain found 74% wanted to know more about where their food came from, but one in five could not explain any food production process. Two in five (41%) had never been to a working farm, despite national initiatives such as Open Farm Sunday.

The initiative was given a cautious welcome by the National Farmers’ Union. Its chief food adviser, Ruth Mason, said: “This innovative approach to connecting consumers with food production sees McDonald’s UK build further on its efforts to demonstrate the vital role that farmers and growers play in its supply chain. However, we would like to see it improve its UK sourcing in some food sectors, particularly with chicken, where it is currently only 10%.”

The roadshow begins next week and it’s the latest move by retailers to try to connect consumers with the realities of modern-day farming in the UK.