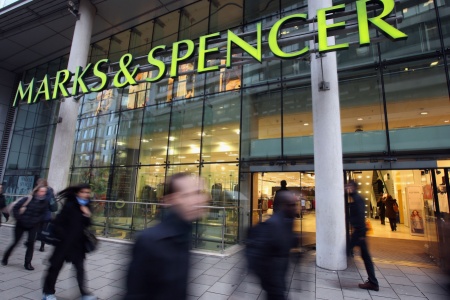 The retailer’s new chief executive, Steve Rowe, said more than 100 UK stores were in the firing line as part of a wider shakeup designed to end a long-running slump in clothing sales and devote more space to its more successful food business. He outlined plans to open 200 new Simply Food outlets.

M&S refused to identify which 30 “full-line” stores – which sell clothing, homewares and food – are to close or identify the 45 outlets that will be converted into food stores. The chain has 304 full-line stores and the closures and conversions will take five years to complete.

The retailer is also looking to relocate underperforming stores. Overall, the changes will mean a reduction of 10% in the floorspace devoted to racks of skirts, jumpers and trousers, with the plan expected to cost £150m over three years.

The turnaround plan outlined by Rowe also includes the closure of 53 loss-making overseas stores in 10 countries. They include 10 stores in China, seven in France and others in Belgium and Hungary, resulting in 2,100 job losses. Only company-owned stores in Ireland, Hong Kong and the Czech Republic will be spared.

The embattled retailer intends to put clothing and food on an equal footing with same amount of selling space devoted to both sides of the business. Currently two-thirds of its floor space is given over to racks of clothing and homewares.

M&S has been battered by low-cost rivals such as H&M, Zara and Primark and shoppers are increasingly spending their spare cash on leisure activities, rather than buying new clothes. The turnaround plan was unveiled as the retailer reported a 19% fall in underlying profits to £231m in the six months to 1 October.

To win back shoppers, Rowe has already cut clothing prices and promised to pay more attention to its most loyal group of shoppers – fiftysomething women he has dubbed “Mrs M&S”. He said changes he had already made in the clothing business were going down well.

His new strategy is an about turn from that of his predecessor Marc Bolland, who believed the retailer could be a global brand and reopened stores in France after a decade-long absence.

“We have made mistakes in the past and we are taking action to correct some of these,” said Rowe, who revealed M&S would continue to expand overseas using a franchise model. The mistakes are expensive ones – it will cost up to £200m to shut loss-making stores in European markets such as France, Belgium and the Netherlands as well as outposts in China.

How CVS, Walgreens battle for market share through their supply chains