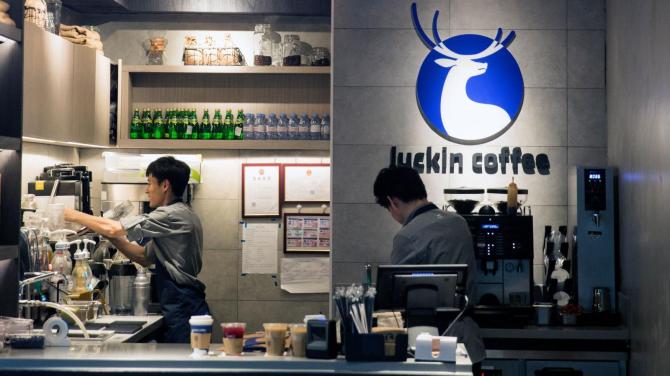 After barely a year in business, Luckin Coffee is challenging Starbucks in one of the US coffee giant’s top markets.

About 2,000 Luckin outlets have sprung up across China over the last year. That includes a store in Beijing’s Forbidden City, the historic cultural site from which Starbucks was famously evicted more than a decade ago.
Luckin plans to have 4,500 outlets by the end of 2019, which would take it ahead of Starbucks to become China’s biggest coffee chain.
The rapid of ascent of Luckin to challenge the US chain shows how Chinese upstarts are increasingly rivaling Western brands in one of the world’s top consumer markets.
While both serve coffee, the similarities largely end there. Unlike Starbucks’ trademark coffee shops, most of Luckin’s outlets are tiny booths in out of the way spots that take orders online for both delivery and pickup.
More important, Luckin has placed technology at the heart of its business from the start. Its outlets don’t accept cash, instead customers can only pay through the Luckin app, which offers loyalty bonuses.
China is Starbucks’ second biggest market after the United States. With around 3,000 stores across the country, it’s still bigger than Luckin. Starbucks plans to more than double that number by the end of 2022. But in June, the company reported a sudden slowdown in growth in China. One of the things it blamed was increasing competition, which analysts interpreted as a reference to Luckin.
There is a growing sense of rivalry between Luckin and Starbucks. In May, Luckin sued the Seattle-based company, claiming it had unfairly monopolized the market. In response, Starbucks told Chinese state media: “We welcome orderly competition, mutual promotion, continuous innovation, continuous improvement of quality and service, and creating real value for Chinese consumers.”
Starbucks is now fighting back. In August, it teamed up with Alibaba, China’s largest e-commerce company, to launch home delivery services. A month later, Luckin announced its own tie-up with another major Chinese internet company, Tencent.
Yuwan Hu, an analyst at Daxue Consulting in Shanghai, said that competition from Luckin is also prompting Starbucks to go more upmarket by focusing more on its Reserve brand in China. The outlets offer consumers more premium coffee options in a larger, more luxurious retail space.
Luckin is focused on competing on price, according to Hu. The company promotes discounts on Tencent’s popular social network, WeChat, and its coffee is generally cheaper than Starbucks’.
Source: CNN Business