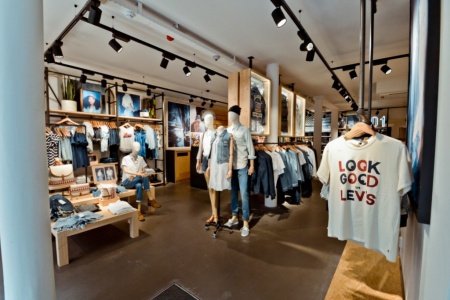 A champion brand in the portfolio of kids specialist Kidiliz (formerly Groupe Zannier), Levi’s Kids is stepping up its operations in the UK. Present in the country through more than 200 points of sale, including multi-brand retailers and pure players, Levi’s Kids is strengthening its partnership with department store Debenhams. The brand has been distributed through the British chain for the last five years, in twelve brick-and-mortar stores and online. Now Levi’s Kids is looking to boost its visibility by opening a series of pop-ups in 100 Debenhams locations in September, taking advantage of the events to display the Levi’s men’s and womenswear collections as well.

“To mark the occasion, we’ve created an exclusive line to be sold in these 100 stores. We have no doubts about the success of this operation, which is the first step in a long-term strategy,” stated Fernando Ferrer, managing director of Kidiliz Group UK.Even though uniforms are still compulsory in the majority of British schools, the UK is one of Levi’s Kids’ five principal markets in Europe, and despite Brexit-related uncertainty, the kidswear market continues to grow in the country.

However, in contrast to the situation in many European countries, multi-brand shops represent only 1% of children’s clothing sales, while fast-fashion companies, such as H&M, and non-specialised stores like Debenhams account for more than half, followed by pure players who represent 6%. “We think that only high-end brands such as Levi’s Kids will be sustainable in the future and they will be able to be distributed and represented through all retail channels.

For that reason, transmitting a positive image to consumers through the brand’s reputation, while also offering quality products, is still the key to maintaining a brand’s desirability in a long-term strategy”, explains Fernando Ferrer. 60% of Levi’s Kids sales come from its junior boys’ collections and, in an attempt to win over new customers, the brand will be also be developing its girls’ lines, offering crop tops and high-waisted trousers in line with the strategy adopted in its womenswear collections.