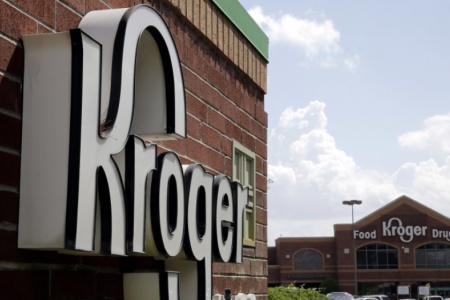 Kroger is suing Visa over fines the grocery chain said the payment company levied against it for debit-card transactions, specifically because Visa wants Kroger to verify purchases with a customer’s signature as well as a personal identification number (PIN). In its suit, filed this week in U.S. District Court for the Southern District of Ohio, Kroger said Visa has threatened to raise and stop processing payments made by debit cards at its stores.

The complaint is the latest spat between store chains and the card industry which have frequently sparred over fees and security matters over the years: Last month, Walmart sued Visa over the same issue.

The dispute has emerged at a time when stores are installing new readers to accept cards embedded with computer chips instead of a magnetic strips. Those cards, used around the world for years, are seen as less vulnerable to the kinds of hacks that have hurt the retail industry in recent years.

Kroger, like Walmart, required customers to verify debit-card transactions by PIN, not by signature. But the company said its spat with Visa started after that company said the setup of the terminals was not in compliance with its rules, which say stores must give customers the choice between a PIN and a signature for verification purchases.

“Visa does not require Kroger to route its transactions only through the Visa network. Visa is focused on protecting a cardholder’s right to choose whether to sign or enter a PIN when completing their payment with a Visa Debit card at checkout,” a company spokeswoman told Fortune in an e-mailed statement.

In its suit, Walmart said that the use of a PIN for debit-card transactions was safer than a signature, a position also held by Kroger, which is the second-largest U.S. grocer after Walmart.

According to the Wall Street Journal, Kroger says it rang up $29 billion in Visa debit-card transactions last year, and that it can’t easily reprogram its terminal.

“There is no rational basis for Visa to cut off Kroger’s ability to accept any or all Visa debit cards unless Visa intended to punish Kroger,” the grocer said in the lawsuit.