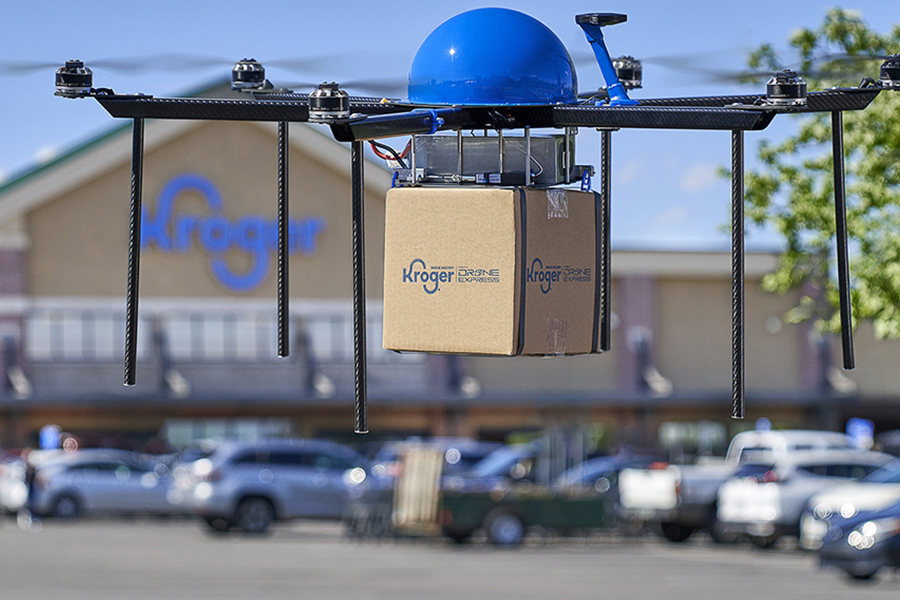 Kroger Co. is diving into drone delivery, starting a pilot at a store near its Cincinnati headquarters.

The supermarket chain is partnering with Drone Express, a unit of Telegrid Technologies, to deliver groceries from a store in Centerville, Ohio, later this spring, the companies said in a statement Monday. The technology allows for deliveries of up to five pounds to customers’ homes or wherever they may be, enabling cookout supplies to be sent directly to a park in as little as 15 minutes, the companies said.

They plan to expand the test to an additional store in California this summer.

“We can enable Kroger customers to send chicken soup to a sick friend or get fast delivery of olive oil if they run out while cooking dinner,” Beth Flippo, Telegrid’s chief technology officer, said in the statement.

Kroger follows rival Walmart Inc., which has several drone tests underway. Last September, the world’s biggest retailer announced plans to use drones from Israeli startup Flytrex to make deliveries in Fayetteville, North Carolina. Walmart is also testing using drones to drop Covid-19 diagnostic kits to customers in two markets, and has teamed with a company called Zipline to deliver health and wellness products to shoppers near its Arkansas headquarters.

Drone Express’s robots are part of a program by the FAA called Beyond, which aims to bring private companies and state and local governments together to develop drone use in areas like small-package delivery and infrastructure inspection.