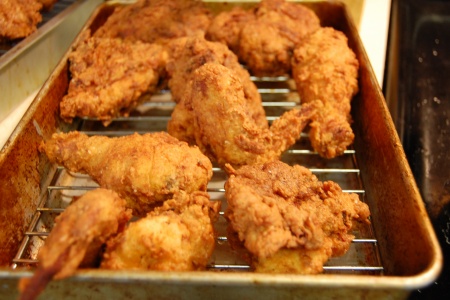 These strategies are in addition to a new “super premium” chicken restaurant player entering the market, whose operators literally built the whole dining concept around mobile technology.

KFC’s newly launched system works with Android, Apple and Samsung Pay but is currently only available in some restaurants, according to a news release. Complete adoption in the U.S. is expected by summer’s end of the app, which allows users to tap and pay inside the restaurants and is also functional at the drive-thru.

“Ease of use and functionality were our first priorities,” said KFC U.S. Chief Information Officer Chris Caldwell. “When we factored in consumer concerns about security and privacy, we identified Android Pay, Apple Pay and Samsung Pay as the best options for our guests.”

The launch of mobile pay is the latest step in a systemwide modernization at KFC, including $80 million in restaurant equipment upgrades and a $250 million financing program to remodel 70 percent of restaurants by the end of 2018.

The Chick-fil-A One  mobile app, which replaces the one that was launched in 2012, lets guests at that restaurant customize meals, as well as order and pay in advance to skip the line at the register or drive-thru. The company said in a news release that executives were motivated to apply this kind of function to their app after they commissioned a study that found that 82 percent of millennial parents said they would do almost anything to avoid long lines at fast food restaurants when they are with their children.

In fact, half of those polled said they’d just skip eating if they had to wait in line.

“This app was developed based on customer feedback, so it was specifically designed to give our guests an even more convenient and personalized experience in our restaurant,” said Chick-fil-A Senior Manager of Digital Experience Michael Lage.

The app features a membership program that rewards customers with free food based on their preferences, and the company is luring customers to download it by June 11 by offering them a free sandwich.