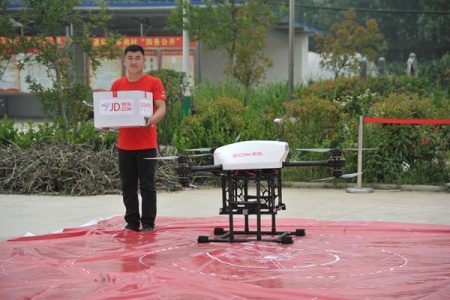 The service around Suqian City, hometown of JD.com’s founder Liu Qiangdong, can more than halve the cost of delivery to less than 0.5 yuan (7.6 U.S. cents) per parcel, said Xiao Jun, vice president of JD.com.

At a delivery depot in Suqian’s Caoji township, two drones are capable of handling 200 parcels a day. The drones can each carry 10 to 15 kg of weight and fly 15 to 20 km at a speed of up to 54 km per hour, said Xiao.

They can automatically load and unload goods and operate in moderate rain and wind with a speed of up to 38.5 km per hour.

It can take a truck hours to navigate the winding mountainous roads that link delivery depots near Suqian, but a drone can make the journey in less than 20 minutes, according to Xiao.

Currently, the drones transport goods between depots rather than to customers directly.

The service will be expanded to cover other rural areas in the future when authorities there lift the ban on drone flights, said Xiao.

The New Kid On The Marketing Block

The Retail formula of success