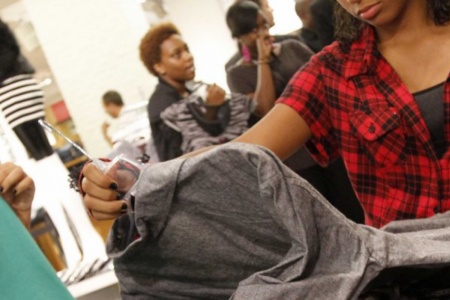 And the problem might be signaling something even more troublesome than dowdy apparel. Instead, it is a total shift in how teen consumers think.

Young people want to purchase experiences rather than actual stuff, and when they do buy clothing or shoes they want to be able to showcase purchases on social media.

“Their entire life, if it’s not shareable, it didn’t happen,” Marcie Merriman, Generation Z expert and executive director of growth strategy and retail innovation at Ernst & Young, said to Business of Fashion. “Experiences define them much more than the products that they buy.”

The only apparel young people want is clothing that can translate into an experience on Instagram or Snapchat.

Given their limited budgets and frugal tendencies, they’re more likely to purchase lots of clothes at fast fashion retailers, like cutting-edge Zara or cheap Forever 21, so that they have ample images to share.

Pinterest is unique in that unlike other social media outlets, which are focused on capturing and memorializing the past, it’s focused on aspiration and the future. By pinning dream outfits, wardrobes, and runway style, women instantly whip up outfit ideas for weeks. Fast fashion stores, rather than traditional retailers, are equipped to fill their fashion needs.

This is a relatively new phenomenon, which is why retailers that thrived in the ’90s might be struggling.

“Back in the ’80s and ’90s, there wasn’t real access to higher-level fashion,” Kate David Hudson, co-founder of online fashion magazine Editorialist, told the The New York Times “It was the heyday of business casual, and stores did well selling core staples.”

But now, consumers have nearly instant access to trends on the runway, and they want the looks that they see as soon as possible.

This is why companies like Zara, with rapid-fire supply chains, are succeeding; they can respond to trends churn out runway-esque designs swiftly

“It (Zara’s supply chain) keeps lead times shorter, which leads to the second advantage: that they do not have to commit to all of their stock well in advance of each season and, actually, are still manufacturing during the season. Obviously this means they can do things like respond to fashion changes, reduce or increase production as necessary, introduce new lines and so fort,” Neil Saunders, CEO of research firm Conlumino, wrote in an email to Business Insider in December.

Traditional retailers Abercrombie & Fitch and Gap are not equipped to do that without having to completely revamp their business models. Instead, they have to resort to incessant discounting to get rid of styles that failed to resonate with consumers. The heavy discounting, in turn, leads to two major problems: declining sales and the general devaluing of a brand as a whole.

However, the struggling Banana Republic has come up with a solution to hopefully mitigate this crisis.

For this month’s New York Fashion Week, Banana Republic will give consumers the chance to buy the newly launched clothes online as soon as they debut on the runway.

The pressure is on for retailers to adapt to these changing ways, particularly since it’s more important than ever to reach teens and nail social media.

A recent Ernst & Young survey reported that teens, or Generation Z, has the highest expectations out of all consumers, and if retailers please them, they’ll in turn, please everyone.

“What I’m suggesting is that they [retailers] understand the needs of Gen Z as the barometer,” Merriman said to Business Insider. “They have the highest expectations. If you please them, you’re also going to please millennials – and Gen X and Baby Boomers and others will be happy.”

That means that if traditional retailers want to salvage their sales, they’ll have to look to young people for inspiration.

Why More Retailers Could Default in 2016