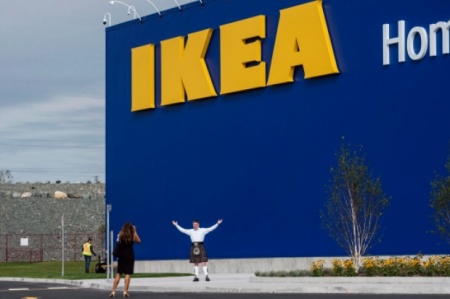 There’s a mix of anticipation and, for some retailers, dread across the Halifax region as Atlantic Canada’s only Ikea location prepares to open this week.

However, the retail giant’s arrival has some concerned it will put local retailers out of business.

“I personally will not be shopping there. I like to support small business,” said Dartmouth’s Sandy Hiltz, who called in to the show.

Cormier, whose council represents both small and large businesses, said he heard similar arguments when Target made its failed push into Canada.

“Fact is, though, those that are offering similar product lines to what Ikea offers, they’ve been competing against bigger competitors for years here. And those that have been able to make a go of it to either survive and/or thrive are doing it because they offer something that’s a little bit different,” he said.

An employee prepares a display in a showroom at the new IKEA store in Dartmouth on Monday. (Darren Calabrese/The Canadian Press)

Cormier also pointed out that if people are driving four or five hours to visit the store, they’re very likely to stay the night.

He points to the example of Bass Pro Shops in Moncton, N.B., which has had success in recent years luring people in for more than just shopping at the fishing, hunting and outdoor store.

“I just can’t imagine it not being good as far as spinoff business goes for other businesses, especially retail businesses in the Halifax-Dartmouth area,” said Cormier.

Caller Sherri Savoie of Rothesay, N.B., said Halifax is a lot closer than the next nearest Ikea location in Quebec.

“I don’t see this as a losing situation because we’re up here in New Brunswick and have already got two or three groups of friends that are planning a trip to Halifax, making a weekend of it, based on going to Ikea,” she said.

Some raised the concern that cabinetmakers would be put out of business once there’s the option of having an Ikea kitchen installed.

Ed McHugh, who teaches business and marketing at the Nova Scotia Community College, said while some cabinetmakers are in such high demand for custom work they never hurt for business, others will be unable to compete.

“I think that if you’re in that business they will take some of your business because they’re going to give you a $49 or $59 or $69 shelf that you couldn’t probably make or get someone to make for $70. You just couldn’t,” said McHugh.

Ikea is getting ready to officially open its first Atlantic Canadian store this week as thousands from across the region are expected to descend upon the popular Swedish furniture chain’s new Dartmouth location. (Darren Calabrese/The Canadian Press)

While quality of some Ikea products may be questionable, Christina Murray of Boutiliers Point, N.S., told Maritime Connection you get what you pay for.

“Buying a coffee table that’s $19.99 — you’re going to probably get one that’s going to last you for a year. But they do make things at Ikea that are considerably more expensive but also, really, very well made and good quality furniture,” she said.

McHugh said Ikea’s flat-pack, assemble-yourself-furniture can be a deterrent for some shoppers.

“That’s the one frustrating part about some of their furniture that people don’t like,” said McHugh.

The store, which is the size of four football fields, officially opens for business on Wednesday.​ (Darren Calabrese/The Canadian Press)

As an employer, Ikea usually gets good marks, said McHugh. When jobs were posted earlier this year for the Dartmouth location, more than 3,500 people applied for the 300 or so job openings.

In terms of its environmental footprint, this location is Ikea’s most sustainable in the country and also the first store to be LEED-certified.

Regardless of how people feel about the retailer opening, both McHugh and Cormier said it’s on track to be a success.

A photo of the Halifax Harbour is used as a window dressing in a showroom at the new store. (Darren Calabrese/The Canadian Press)

“You have people that will drive here from Charlottetown, from Moncton, who’ll drive from Sydney, from Antigonish, Wolfville — and Ikea will be the main reason why they’re going to come,” said McHugh.

“I’ve never seen in this region — I’ve been in Halifax now since the mid-80s — this much hype around a retailer.”

The store, which is the size of four football fields, officially opens for business on Wednesday.​