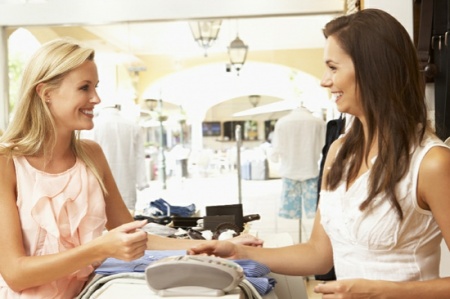 Staffing stores is a huge expense for retailers—more than half of a typical retailer’s selling, general and administrative expenses, according to Bain & Co. So it’s perhaps natural that technology has been leveraged to drive that cost down.

In recent years, retailers have used algorithms that determine when stores need to be staffed and when they can be sent home—a practice that has wreaked havoc on those employees’ lives, come under scrutiny from many state law enforcement agencies, and, as a result, is slowly but surely being abandoned.

But the murky legal and even moral aspects of that practice aren’t the only problems, experts tell Retail Dive. It also reflects an attitude that mistakes the big cost of employees as a drag on profits rather than an important investment in today’s demand for omnichannel retail, they say. It’s a misuse of technology, which, in store employees’ hands, can be a powerful tool for them to foster improvements in everything, from the customer experience to the supply chain.

Ton argues that they treat the money spent on workers as a strategic investment and design operational systems that enable their workers to be more productive. That allows all four to pay better than their competitors while also offering low prices and pleasing shareholders, Ton said.

“I have studied retail operations for more than 10 years and have found that the presumed trade-off between investment in employees and low prices can be broken,” she wrote in the Harvard Business Review about her work. “Highly successful retail chains… not only invest heavily in store employees but also have the lowest prices in their industries, solid financial performance, and better customer service than their competitors. They have demonstrated that, even in the lowest-price segment of retail, bad jobs are not a cost-driven necessity but a choice. And they have proven that the key to breaking the trade-off is a combination of investment in the workforce and operational practices that benefit employees, customers, and the company.”

In fact, Costco last week announced that it would increase its starting pay by $1.50 to $13, the first such raise in nine years, in addition to the annual raises it institutes at the higher end of its pay scale.

This ability to compete “head-on” with excellent store staff can help retailers resonate with customers in today’s tough retail environment.

In a discussion about Nordstrom and its apparently successful differentiation in the retail space, retail futurist Doug Stephens told Retail Dive that its store employees cannot be separated from its longstanding reputation for stellar customer service. And Columbia University retail studies professor Mark Cohen has called out Costco employees—who are compensated well above not just minimum wage but also the prevailing industry averages—as key to that retailer’s consistent success in pleasing customers.

“Costco keeps making money because they load those aisles with really high value merchandise and pay their associates a lot of money,” Cohen told Retail Dive last year. “And Costco’s associates are helpful and informed, as opposed to nasty, hostile or absent.”

As retail continues to confront shifting technology trends, experts argue that strong associates in the store are an inescapable feature of omnichannel retail. The reasons are multi-faceted. Associates further the brand’s reputation and boost the customer’s experience in store through knowledge about the merchandise and inventory. And their downtime, rather than signaling a call to go home, can be leveraged by giving them duties across channels. ​

“Retail store associates have a major role to play in the revitalization of brick-and-mortar stores during the digital age,” Kevin Swanwick, senior director of retail solutions at Manhattan Associates, told Retail Dive in an email. “Store employees are responsible for delivering a tailored selling and service experience across both digital and physical channels. Additionally, the store workers’ responsibilities have changed as they now have access to and are expected to sell the entire network of available inventory, rather than just what’s in their own store. Improved access to information and inventory visibility allow store associates to provide personalized interactions and help retailers to build customer loyalty. We are seeing the birth of the ‘Enterprise Sales Associate.’”

While much is made of the power of analytics and even the appeal of increasingly sophisticated—and even adorable—robots, there’s a level of creativity that humans have that, so far at least, can’t be replicated.

Wickard says that the traditional chores, like tracking inventory, should be automated rather than done by workers with a clip board. That would provide retailers with superior data, and free up associates for more customer-facing or more sophisticated work.

“When retailers set up their staff doing things that literally does not add value to customer service, just because the retailer doesn’t have the data available to automate that, that makes for a really tough day,” Wickard said.

“You can’t automate the actual person who needs help in a store. You can’t automate making sure endcaps are beautiful and appropriate—the things that make the store not just four walls and some stuff, the way you are uniquely adding to the stuff, comes from your store staff.”

Some retailers may have thought that increasingly sophisticated data systems and robots would dampen the need for workers in stores. In real life, however, the connections between technology and humans for retailers simply need to be stronger—perhaps more numerous, but definitely more sophisticated.

“In years past, the store associate focused only on selling what was in the store,” Swanwick said. “Today, store associates are tasked with selling the enterprise, basically selling anything, to anyone, anywhere.”

To make that possible, he says, retailers must give store associates access to mobile technology that arms them with information while also allowing them to be active and accessible on the store floor. They should have access to customers’ order histories and personal preferences so they can provide professional knowledge and recommendations to meet customer needs. This creates a highly personalized and memorable experience for the customer, Swanwick said.

Of course, the retailer that does this best is Amazon, which presents its customers with their order histories and makes suggestions based on past orders and searches. There’s no reason, says Wickard, why a brick-and-mortar retailer couldn’t be just as attentive. It takes data, and it takes arming store associates with that data.

“Even yesterday’s technology amplifies people—the speedy credit card transaction that allows a clerk a few extra seconds to connect with a customer and reinforce their store’s brand while closing the sale,” Wickard said. “Or the instant access to detailed information about inventory that allows the clerk to utilize their fantastic interpersonal skills instead of just their product knowledge. People have been designing and utilizing more and more sophisticated tools since the beginning of time.”

But with all this innovation, people have yet to design an algorithm that matches the interpersonal connection of a well-trained store associate.

“We want to protect that amazing moment when the clerk and the customer are having an interaction,” said Wickard.

How J.C. Penney Pulled Off the Retail Turnaround of the Century