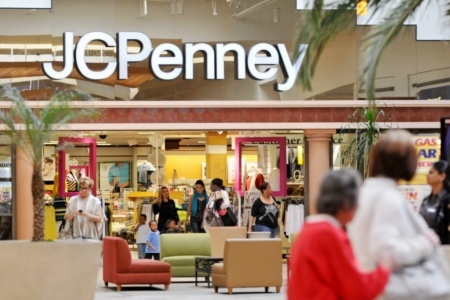 Two to three years ago, when shoppers walked through any one of the just over 1,000 J.C. Penney (NYSE:JCP) stores, they no doubt thought the chain was on its way out. But what they were actually witnessing was the beginnings of a turnaround for the 100 year-old brick-and-mortar retailer. As was often pointed out during the dark days of 2013, a year in which JCP had to issue shares just pay the bills, the odds were definitely in favor of an eventual bankruptcy filing. One need only Google search “retailers that have gone out of business” to get a fairly lengthy list.

Now we sit (or at least I do) in the early months of 2016, feeling nothing but respect for the leadership of the Plano, Texas-based retail chain. True, I may be biased, the Midwestern milieu I grew up in was so J.C. Penney-centric that I’m reasonably sure it was the first retailer I ever entered. Sentimentality aside, investors will no doubt admit that J.C. Penney’s fighting attempt to re-reinvent itself has been downright striking — so much so that it’s important to take stock of just how far it has come.

The reader will no doubt notice that while fiscal 2012 was clearly the punch that sent JCP up against the ropes, the trouble really started long before then. You might be expecting me to pin the blame on former CEO Ron Johnson, arguably the creator of the Apple Store, who took over as J.C. Penney’s CEO on Nov. 1, 2011. While it’s true that Johnson’s initiatives, which included outfitting employees with iPads and doing away with the age-old retail trick of using coupons to bait deal-hungry customers, are closely linked with the 25% drop in revenue from 2011 to 2012, I do have one thing to say: It wasn’t all Johnson’s fault.

Management knew it was floundering with sales sliding gradually following their peak in fiscal 2007. The company was failing to find its place in an increasingly alien world dominated by the iPhone and e-commerce. What would you do? Continue on with business as usual, hoping to get lucky? Or, like the board decided, hire the man who created one of the most successful retail enterprises of this century (so far): the Apple Store? The defense, dear reader, rests.

Johnson was chosen as an innovative successor to the quintessential retail operator, former JCP CEO Mike Ullman. It’s inconceivable to think Ullman didn’t have a big say in picking Johnson, no doubt because he was fully aware of the need to shake things up at good old JCP. The experiment failed miserably, and this forced Ullman to come out of retirement and save his beloved company.

Getting back to basics
Should J.C. Penney have given more credence to just who its core customer was, and not ditched sales coupons in favor of iPads and a massive rebranding that included pricey store renovations? Probably. But can you blame them? As the old saying goes, hindsight is 20/20. JCP took a shot at rebranding. It didn’t work. But the company gets points for trying.

Following Johnson’s departure, Ullman found himself trying to rescue the company he had captained since December 2004. The organization he no doubt found upon reentering its Plano, Texas headquarters was a bruised and bloodied one: JCP was the laughing stock of the retail world, second only to Sears Holdings. Suppliers were beginning to question its very ability to meet accounts payable obligations, and scores of shoppers started walking to the other side of the mall toMacy’s. What happened next, though, was downright impressive. While slow at first (like most real change), the JCP turnaround started to pick up steam.

At last count, over 100 J.C. Penney store locations have been shuttered. Coupons have been printed, prices have been raised, and unwanted inventories discounted and pushed out the door. The product of these moves, while costly in the short run (think, gulp, 22% gross margins), has been a rejuvenated retailer that now knows where it fits in the world. But don’t take my word for it: 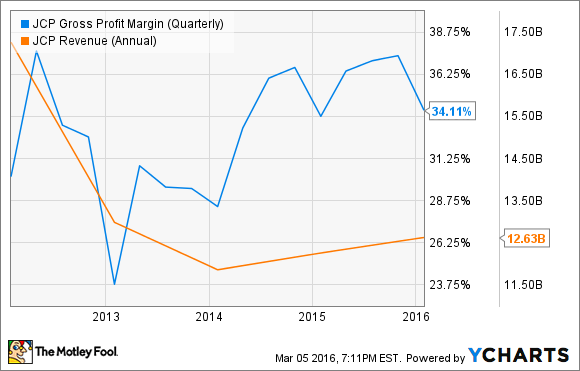 Revenue hasn’t quite returned to previous levels for the party to really be back, but margins are certainly as strong as they’ve ever been. All that remains is for JCP to continue drawing back in the customers it lost now that it’s under the leadership of newly appointed CEO Marvin Ellison. It won’t be easy, but it seems highly likely that good old J.C. Penney will be back to some semblance of its old self by the end of the decade.

There’s something big happening this Friday
I don’t know about you, but I always pay attention when one of the best growth investors in the world gives me a stock tip. Motley Fool co-founder David Gardner (whose growth-stock newsletter was the best performing in the world as reported by The Wall Street Journal)* and his brother, Motley Fool CEO Tom Gardner, are going to reveal their next stock recommendations this Friday. Together, they’ve tripled the stock market’s return over the last 13 years. And while timing isn’t everything, the history of Tom and David’s stock picks shows that it pays to get in early on their ideas.