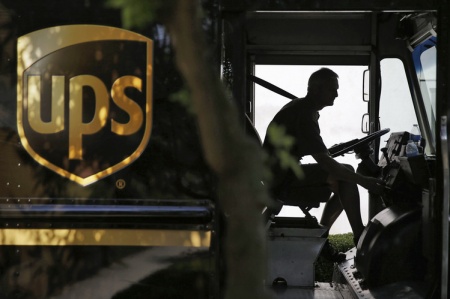 UPS recently said it is expecting record deliveries during the holiday season, a blast of optimism that came as it also reported another strong revenue quarter. But for a year or more, the world’s largest package delivery company repeatedly has been faced with questions about one of its biggest customers, Amazon, which is amassing its own shipping fleet and delivery assets. Meanwhile, a slew of firms — most prominently Amazon, but also Uber, Lyft, Postmates and many others — are redefining the meaning of express delivery to include same-day-delivery or even quicker on-demand delivery. Also, as cross-border e-commerce booms, the international sellers UPS supports face an array of new complexities involving different languages and currencies, as well as the taxes administered in different countries.

Together, these trends create opportunities for new competitors — and a chance for incumbents to slip up, or even stiffen up in defense by reining in capital spending. Yet UPS remains bullish on its prospects, not only for the holiday season (a period during which it expects to see a record 700 million shipments, 14% more than last year) but also for the coming years. UPS CEO David Abney said on the company’s recent third quarter earnings call that it plans to buy 14 new 747 freight jets to be delivered over the next three years, with an option to buy 14 more. He also noted that UPS’s capital expenses grew from $500 million last year to $2.8 billion this year.

So UPS continues to up spending at a time when threats to market share exist, but meanwhile, its quarterly revenue and profit postings have yet to show dents from those threats. In Q3, UPS profit was up 14%, its seventh straight quarter of double-digit growth. Also, Abney told The Wall Street Journal that spending is all about the company’s growth strategy and competitive pressure.

The competitive threats may continue to grow, but Louis DiJianne, director of retail and consumer products at UPS, told Retail Dive that the company has lived through market upheaval before, and has made (and continues to make) investments that position it well for the future.

The most obvious of the new entrants DiJianne referred to is Amazon, which accounts for as much as $1 billion of annual UPS revenues.

Amazon for the last few years has been steadily building up its own shipping strategy in the form of investing in everything from planes to trucks to drones with an eye toward helping it cut back its substantial delivery costs. There has been much speculation that Amazon could start doing much more of its own shipping and delivery, and perhaps even create a shipping company unto itself to serve the broader market. On the surface, it would appear a customer that big using its own shipping channels could spell disaster for UPS. Yet UPS, as well as some market analysts, doesn’t seem concerned.

Amazon embodies many of the changes happening in the shipping and delivery ecosystem. It drove a revolution in same-day delivery; it’s a major force in driving an international, cross-border e-commerce boom; and its aggressive focus on improving the quality of the customer experience has vastly influence retail and how all companies in the sector treat their customers.

However, UPS has not been ignoring these changes, and DiJianne argued that the company has made several investments over the last five years that demonstrate it’s in step with where the sector is going in the future. A couple of deals in particular provide some evidence for how it plans to weather the next competitive storm.

Seeing UPS put some money in Deliv’s pockets was interesting in part because Deliv was not shy about telling shipping and delivery market incumbents that they just didn’t get the fundamental market shifts happening around them. A Deliv executive told Retail Dive in early 2015 that FedEx in particular didn’t understand what was afoot, and while UPS was not mentioned specifically, the comment seemed an indictment of all sector incumbents.

Then again, it wasn’t so clear back then in 2014 that same-day delivery would be much of a force. Boston Consulting said at the time that the majority of customers were more interested in free shipping than faster shipping. But more recently it has become clear that come retail customers like same-day and on-demand shipping because it feels more like making an in-store purchase that they don’t have to wait for to enjoy, and also reduces the need for package tracking.

Like same-day delivery, cross-border e-commerce package delivery is doing its part to reshape the shipping sector. As e-commerce sellers and buyers hook up with greater frequency, international shipping and delivery activity is growing quickly. Transparency Market Research said in August that the decade period between 2014 and 2024 will see the global e-commerce logistics market grow from $122 billion to $781 billion.

UPS’s investment in new jumbo freight jets demonstrate one aspect of how it’s readying for that growth, but as far back as 2014, the company recognized it had to do something to help its retail partners navigate a complex international shipping environment. UPS responded by acquiring i-Parcel, which offers a software-based solution that can be embedded in a seller’s website to help facilitate transactions in the native languages and currencies for 100 countries and 70 currencies.

The Deliv investment and i-Parcel acquisition represent two moves in UPS’s effort to keep pace with rapid changes in its sector, but DiJianne said the company knows it has to be watchful in all aspects of its business to make sure it’s giving customers what they want.