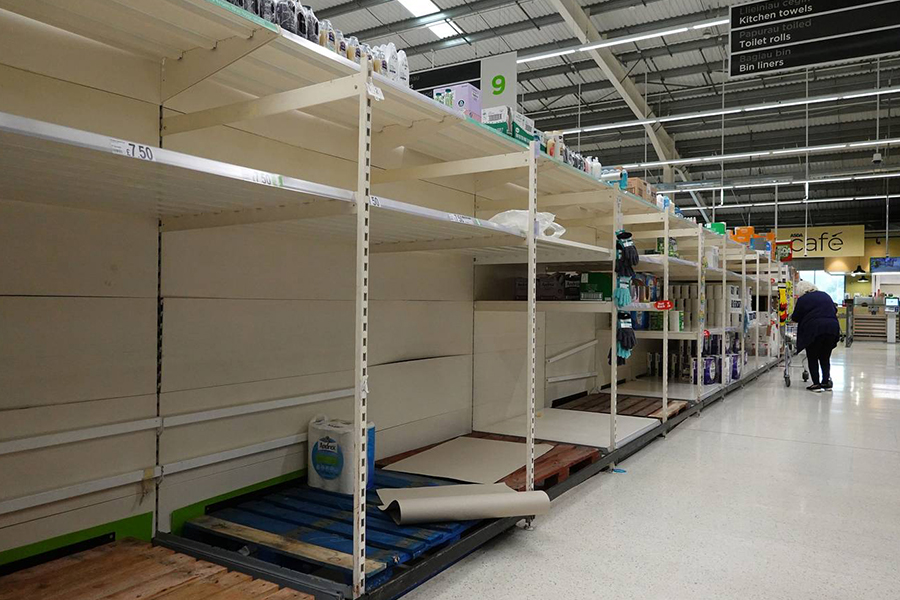 As the UK braces itself for a surge in coronavirus cases, some people are preparing for the worst. As more and more areas are put under local lockdown, it could be only a matter of time before another national lockdown. And with that could come a repeat of life as it was in the spring. No pubs. No gyms. And no loo roll.

Things got out of hand in March and April, with supermarket shelves stripped bare of flour, toilet roll and pasta. Over the summer, stock levels have normalised and some stores have even tried to sell off extra bags of pasta they sourced in a panic. But there are hints that some people are starting to panic buy essentials, with photos on social media showing shelves stripped of toilet rolls once more. Tesco and Morrisons have already put in restrictions on some purchases to stop a repeat the first wave of panic buying.

This winter will be a make or break test of whether supermarkets have learned from the first lockdown. So should we be worried? “There’s been a bit of action over the summer and some retailers have taken on extra warehouse space in that intervening time,” says Kevin Mofid of Savils, who monitors the UK’s warehouse capacity.

In fact, it’s been a record-breaking year for new leases signed on warehouses, with a forecast 40 million square feet of space contracted – compared to a long-term average of 28 million square feet a year. “What’s evident is that a lot of people are moving from what we called a ‘just in time’ supply chain to a ‘just in case’ supply chain,” says Mofid. “That means having more inventory, which means you need more warehouse space.”

But any issues that do arrive this winter won’t be with supply chains. “Retailers have done an excellent job in ensuring customers have access to food and necessities throughout this pandemic,” says Andrew Opie, director of food and sustainability at the British Retail Consortium, which represents the industry. “Supply chains are stronger than ever before, and we do not anticipate any issues in the availability of food or other goods under any future lockdown,” he adds. What has them worried is customer behaviour. “We urge consumers to be considerate of others and shop as they normally would,” says Opie.

Trying to unpick how people react to perceived – if not actual – shortages is proving difficult for retailers. Even with all the best forward-planning, if everyone decides to buy ten times the normal amount of toilet roll in one week, supplies will fail. “The problem is all the behavioural studies, Clubcard data and focus groups down the years haven’t always got things quite right – and we’ve never had a pandemic,” says Steve Dresser, a retail expert. Supermarkets are also still walking a fine line between keeping us fed and watered and making the maximum possible profit. “Costs are still an implication and they still weigh heavy,” says Dresser. “Despite the record sales, we can see that profits are not necessarily translating.”

“We’ve got a little bit of a wobble, with a degree of increased purchasing happening in the last two or three weeks, as people think about the possibility of a second lockdown,” says Shane Brennan of the Cold Chain Federation, which supplies temperature-controlled items like frozen fish, fresh meat, and chilled pizzas to supermarkets. But he says things feel different. “It’s nothing like it was last time. It’s far more isolated and less acute, partly because consumers feel confident the supply chain can cope.”

A spokesperson for Tesco says it has “good availability, with plenty of stock to go round” and adds that people are encourages to “shop as normal”. The retailer has also introduced bulk-buy limits in-store on flour, dried pasta, toilet roll, baby wipes and anti-bacterial wipes “to ensure that everyone can keep buying what they need”. Customers can’t buy more than three of any of those items. In addition, the retailer has introduced further limits on rice and canned vegetables for online purchases to prevent stockpiling.

Retail experts say that there isn’t any problem with a shortage of stock in the system, but rather in getting it onto shelves in a retail environment that is no longer built for large backlogs. This issue, which plagued retail during the first lockdown, has yet to be solved. Unlike in previous decades, supermarkets in the 2020s don’t have large warehouses of stock in-store. Even shelves are less heavily stocked because of the way the logistics system is designed – allowing us to benefit from fresher produce.

The problems begin when sales spike unexpectedly. With some items sold out, people start to choose alternative products to their preferred ones, which causes a spike in demand for items that are more difficult to source and resupply. Toilet rolls, for instance, are cumbersome to transport. They’re bulkier, and only 23 or 24 full pallets of them can fit on a single wagon attached to a truck. “An entirely empty aisle could take a wagon to fill up,” says Dresser. “And that’s just one aisle.”

Mofid says that some retailers have engaged with their logistics partners – companies like DHL and Eddie Stobart – “to get a bit more flex in their supply chains”, helping them patch holes on shelves as they appear more quickly than they did this summer.

What is also different from the situation retailers faced in the spring is the way we shop. Online grocery volumes have doubled as more of us shy away from busy supermarket aisles. Now, one in eight pounds spent with supermarkets is spent online. Aldi, which has previously held out against offering online shopping, plans to introduce click and collect at a number of stores, while Tesco, Asda and others have gone on a hiring spree, bringing in more pickers to fulfil online orders.

But that won’t have an effect on stock levels on supermarket shelves for those who are sticking to physical stores. Because warehouse space remains at a premium, and most supermarkets (with the exception of Ocado, which has a 1.7 per cent market share) aren’t operating online-only warehouses, most of those pickers are selecting items from the same shelves as the rest of us. “All they’re really doing is ramping up what is called in-store picking,” says Mofid. “They’re not taking dedicated warehouse units.” Ocado, which does operate remote warehouses, will also struggle to expand, says Mofid, because it relies much more on automated and robotic picking of orders than human-based shopping.

But despite that, and despite the early photographs of some empty shelves, the retail sector feels confident it can adapt to whatever comes around the corner – at least this winter. “We’ll keep going. People feel like we know what we’re doing in the Covid world right now,” says Brennan. What happens after January 1 is another question entirely. “Obviously there’s huge uncertainty heading down the track in Brexit – and what’s going to happen in terms of disruption to the supply chain after that.”