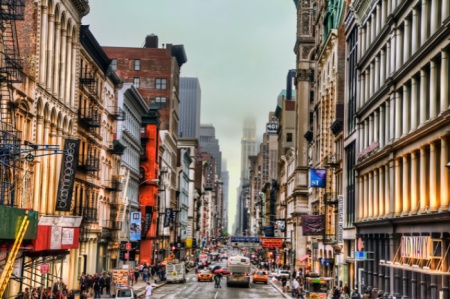 Since the 1950s, when artists began flocking to its cobblestone-paved
streets in search of lofts and workspaces, SoHo has been shrouded in an
aura of trendiness. For several decades, boutiques and major retailers
alike set up shop in SoHo, hoping to entice upscale customers and
tourists looking to splurge.

However, as rents continue to soar, the artists that once dominated SoHo
have increasingly fled for cheaper spaces in New York’s outer boroughs,
while luxury brands have begun shuttering storefronts to cut down on
overhead. These shifts, perpetuated by retail challenges occurring on a
national level, have made way for the rise of pop-ups, ephemeral
experiential stores often used by emerging retailers to test out
products and strategies.

For several years, Melissa Gonzalez, founder and CEO of pop-up consultancy Lionesque Group, had to haggle with real estate brokers and landlords to get them to see the value of offering short-term leases to retailers in  Soho. It wasn’t an easy sell. Luxury retailers with long-term leases had long thrived in the neighborhood, so a flash-in-the-pan store open for as little as a few days was difficult to grasp.

However, as the luxury market finally began to shed its luddite tendencies and embrace e-commerce, brands started funneling resources to digital and re-evaluating their brick-and-mortar strategy. At the same time, rent grew prohibitively high for some retail tenants in SoHo, who were beginning to find more efficient ways to make sales online. For many, this meant downsizing storefronts and turning toward digital sales. Across the U.S., upward of 10,000 retail locations are expected to close in 2017 alone.

Despite its status as a tourist area and home to high-income residents with money to spend — the average household income is more than $140,000, and the median home price is more than $2 million — SoHo has not been impervious to commercial rent spikes. Areas including Bleecker Street have been among the hardest hit. In its heyday, the street boasted not one, but six Marc Jacobs stores, three Ralph Lauren locations and two Coach stores — all within a four-block area — which have all closed, The New York Times noted last week.

For newer companies, as well as established brands seeking to test products and marketing tactics, pop-ups provide an ability to experiment with less commitment. “Pop-up stores have the ability to keep inventory low, which keeps costs down, while also being able to stay nimble and cycle through different styles of merchandise to keep consumers coming back,” said Cooper Smith, digital of Amazon IQ research at L2.

Smith said another threat to traditional retailers in Soho is the continued reign of fast fashion. The explosive popularity of brands like H&M, Zara and Uniqlo, which all hold retail space in SoHo, has made it difficult to lure shoppers into high-end stores.

This transpires to a unique entry point for pop-ups, now driven by changing consumer sentiments and interest in experiential shopping. As a result, Gonzalez said the tables have turned: The same brokers and landlords she used to call relentlessly now have her phone ringing off the hook, keeping her apprised of openings.

SoHo’s real estate market is also realizing that traditional retailers are in trouble. Just last week, Michael Kors announced it is closing more than 125 brick and mortar locations. As a result, landlords have come around to giving lesser known names a shot — they’re not being buoyed by the certainty that a more established brand would stay afloat.

Despite the uptick of empty storefronts or shuttering stores, Karen Bellantoni — vice chairwoman at RKF, a retail real estate firm that represents both retailers and landlords in SoHo — said these spaces are being swept up so quickly by pop-ups that soon competition for pop-up stores will start driving emerging brands elsewhere.

Bellantoni said the success of ventures like SoHo’s Nike store — which opened in 2016, touting several experiential features beyond straight retail — have also helped perpetuate pop-up culture. From a marketing perspective, it has become an important destination for establishing visibility.

Brennan Wilke, svp of customer experience strategy at InMoment, a
customer experience management firm, said retail trends like this often
spur a domino effect, particularly when they occur in a neighborhood
that has long been an arbiter of style.

Brennan Wilke, svp of customer experience strategy at InMoment, a
customer experience management firm, said retail trends like this often
spur a domino effect, particularly when they occur in a neighborhood
that has long been an arbiter of style.

Though luxury brands are navigating a new way to connect with consumers
by straddling the divide between online and physical stores, Wilke said
brick-and-mortar experiences will always be important to consumers and
the rise of pop-ups demonstrates demand for innovative ways of
approaching retail.

East Coast grocery battle, the competition is going to increase