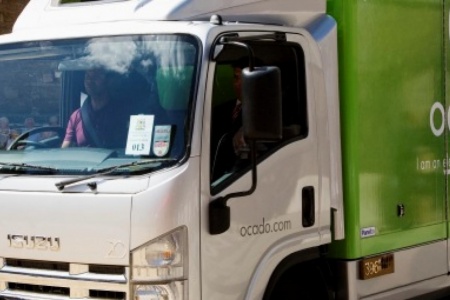 Echoing comments of other conference speakers, Steiner acknowledged grocery e-commerce is accelerating in the U.S.

“The latent demand already exists,” he said. The key to growth is its availability, he added, noting that the U.S. market has been slow following some “spectacular failures” about 18 years ago.

The Food Marketing Institute and Nielsen are forecasting that 10 percent of the U.S. $1 trillion annual grocery business will go online in the next four to six years, Steiner said, comprising a $100 billion annual market.

“Why has so much apparel gone online and so little grocery?” he asked. “The vast majority (in the U.S.) do want to shop online.” Consumers who have tried shopping for grocery online say there is too much hassle to it, he added.

“Our business has dispelled many, many myths around online grocery,” Steiner said. The first being that no one makes money online. In the U.K., 40 percent of customers regularly use an online grocery.

Another myth is that people won’t buy fresh food online. Steiner said this myth has been perpetuated in the U.S. by Amazon.

Steiner noted that Ocado’s website advises customers how many nights they have to consume their food after they receive it.

Walmart has thrived because it figured out how to get groceries into customers’ kitchens more cheaply, he said. “But to thrive online you also need to do an amazing job for the customer.”

Ocado introduced an iPhone shopping app in 2009 which, according to Steiner, was the world’s first physical shopping app. More than 60 percent of Ocado’s business is now mobile.

The use of mobile spans age groups and income levels. Half of Ocada’s new customers have joint incomes of less than $55,000 per year.

All students of e-commerce recognize that an efficient supply chain plays an important role in e-commerce success. Steiner reviewed how Ocado has maximized its supply chain efficiencies to deliver product rapidly at the lowest possible cost.

“When the supply side changes (in the U.S.), that will change,” he said.

“We’re able to do that because of our first-in, first-out day rotation,” he said, “as well as the scale of our facilities, and the data and machine learning that we use in our supply chain to keep the highest levels of availability and the lowest levels of food waste.”

The company’s software and automation are proprietary, supported by 1,300 engineers.

“We pick our orders at extremely fast rates with our goods-to-man picking systems,” he said. “We’re using one sixth of the labor to deliver a better customer proposition.”

“We can talk to those 3,500 robots 10 times each per second, for two-way confirmed communications, 20 times the power of Wi-Fi. Nothing available from the likes of the Ciscos, the Motorolas, the Googles. We had to develop that in the U.K. with scientists in Cambridge.”

Steiner said the standard distribution center supply chain model that most retailers use is less efficient than the automated fulfillment model.

The efficiencies provided by automation has supported accuracy and reduced costs.

Ocado has over 99 percent item accuracy in its orders, Steiner said, and over 95 percent on-time delivery. Deliveries are made in one-hour time slots, starting on the hour or the half hour, beginning at 5:30 a.m. and delivering until 11:30 p.m., seven days a week. Ocado charges for delivery for some customers.

The company ships more than 50,000 SKUs, which is more than double that of Tesco, Sainsbury or Waitrose in the U.K, Steiner said. The inventory includes favorites of different nationalities, as well as organic products.

“But price is the big driver where we’re dramatically different,” he said. Ocado matches Tesco’s, “the Walmart of our own market,” he said.

While Ocado charges for some deliveries, “every one of our customers can find free delivery slots if they want them,” Steiner said. The average delivery charge is 1.5 percent, he said, the equivalent of $2 per order.

Ocado increased its product variety in the last four years from 35,000 to 50,000 items but maintained its item accuracy while improving unit productivity and decreasing its food waste.

“Today we have the lowest food waste in the fresh food industry,” Steiner said.

The company also optimized the routing of its deliveries. Every Ocado van has the annual sales of $1.4 million — the same as a Dollar General Store — versus $600,000 for Tesco’s, he said.

Ocado is currently investing to double its capacity. Its largest warehouse will be coming on line later this year, he said, and will ship up to 2 million items per day, with an expected run rate of $2 billion in sales.

The grocer has licensed its technology to Morrisons in the U.K., Groupe Casino in France and Sobeys Inc. in Canada under a new company initiative, Steiner added.

Meanwhile, technology does not stand still, which is why the company is investing in driverless deliveries, robotic warehouse picking, and a proprietary voice engine built on Alexa.

“It’s constantly ensuring that we disrupt ourselves and no one else does,” Steiner said.