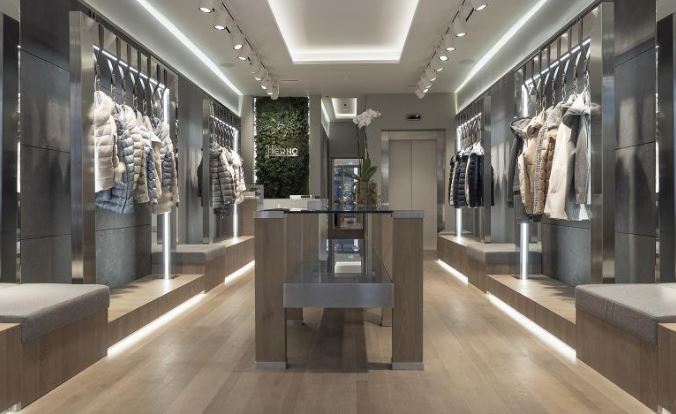 It’s fortuitous that this week Herno celebrates the opening of its sleek 300 sq m Mayfair flagship in Central London. As the winter months draw in, we’re in need of the Italian outerwear specialist’s snuggly, high performing and technically advanced pieces more than ever.

Last year, the label, which was founded near Lake Maggiore, next to the River Erno, celebrated its 70th anniversary, with a milestone exhibition at Pitti Uomo 94 in Florence. A year later, and its expansion has London’s River Thames more in mind, with an Old Bond Street store, neighbouring Prada, Max Mara and Gucci. Bond Street is the subject of much recent retail expansion. In 2019, Loewe, Celine and Alexander McQueen have all opened boutiques on the world’s third most expensive shopping street. Last month, Louis Vuitton also reopened its Peter Marino-designed flagship after months of renovation. 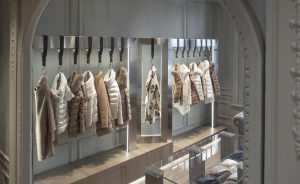 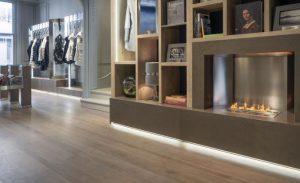 In Herno’s store, men’s, women’s and children’s collections are housed across four levels in an elegant art nouveau building, its façade flanked with cherubic statues and a swaying Herno flag. Original cornicing has been swathed in a shade of deep grey, and these classic elements are offset using Herno’s signature fixtures: brushed stainless steel, sleek crystal and industrial hooks from which the brand’s signature padded, patterned and embellished outerwear are suspended.

In a nod to the natural forms of the label’s namesake region, the store’s entrance boasts a contrasting green wall, and a table featuring images of the Erno River. Even more educative, upstairs on the first floor a cosy Library space features beechwood shelves and books outlining the history of the brand. After a spot of contemplation, further upstairs shoppers enter the artisanal world of Herno Laminar, its couture-focused collection which combines high end fabrications like bouclé with innovative technical innovation, to create covetable outerwear pieces in monochromatic and metallic shades.

Some people out there may be already praying for summer. But with these outerwear options, we’re craving an extended cold snap.

American Eagle to close all its Japanese stores