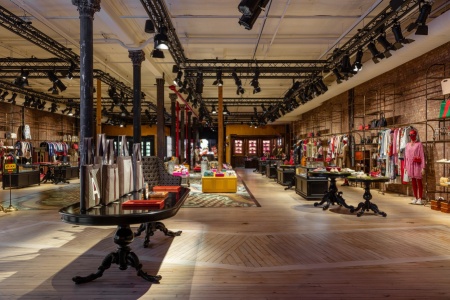 The 10,000-square-foot store, located in a landmark-protected 155-year-old former pencil factory, features restored brickwork, wooden floors, a tin ceiling and industrial columns. The soft furnishings bring splashes of color to the space with bold shades and Gucci prints, while the floor features three vibrant artworks handpainted by Italian artists. Gucci Wooster will house the brand’s men’s and women’s ready-to-wear lines, jewelry, accessories and homeware, all of which is displayed throughout the store on decoratively embellished furniture pieces, as well as in vintage pharmacy display cases and luggage carts.

The space’s real appeal, however, is revealed where Gucci has doubled down on customer experience. The store will be the first to offer Gucci DIY, a customization tool allowing customers to personalize unisex luggage items as well as the iconic Ace sneaker with different colors and fabrics, using augmented reality technology so that consumers can preview their customized pieces in real time. Elsewhere, a projection room kitted out with orange armchairs, Muzik headphones and innovative no-glasses 3D video screens seeks to give customers an immersive brand experience. The space will host a rotating series of artistic projects, starting with a film directed by Wu Tsang and Adam Csoka Keller about the New York house music scene, part of a collaborative project between Gucci and Frieze celebrating the 30th anniversary of the second summer of love.

Seeking to channel the neighborhood’s artistic legacy, Gucci Wooster has also signed off on a number of other collaborative projects. John “Jellybean” Benitez, icon of the New York club scene in the 80’s, will be the retail destination’s resident DJ until the beginning of 2019, selecting the store’s playlist until that time. Andy Warhol’s SoHo-based magazine Interview will be reprinting an iconic December 1985 edition featuring Madonna on the cover, in which a range of neighbourhood institutions – from restaurants to stores and museums – have been invited to appear, largely through adverts.

To celebrate the store’s opening, Gucci’s collaboration with “hip hop’s fashion godfather”, Harlem-based tailor Dapper Dan, will also be available at Gucci Wooster two months before its global release. In an attempt to give these creative partnerships another dimension, a series of conversations with collaborators Jellybean, Dapper Dan and Wu Tsang are now also available as Gucci podcasts. As the luxury industry continues to explore strategies that reemphasise exclusivity and high-end services, Gucci Wooster follows up on the opening of another of the brand’s idiosyncratic retail destinations, Gucci Garden, in a 681-year-old Florentine palazzo at the beginning of the year. The SoHo store launched with a private party on Saturday night, with Rihanna, A$AP Rocky, Jared Leto, Alexa Chung and Dapper Dan himself in attendance. Gucci Wooster is now open at 63 Wooster Street, New York.

Nestle to pay $7.15 billion to Starbucks in coffee tie-up

How Amazon Plans To Dominate The Private Label Market