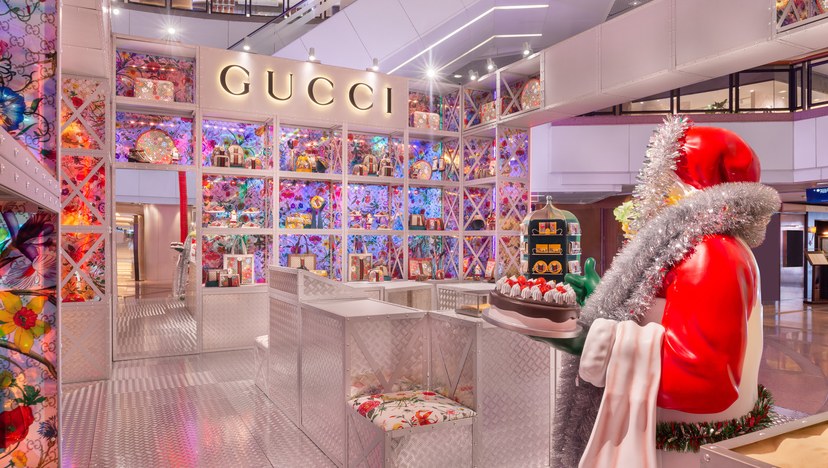 Gucci is kicking off a series of global, themed pop-up stores designed to create more reasons for customers to shop across the year, especially in regions where the Kering-owned luxury brand may not already have a physical outpost. Target destinations over the next year include Chengdu, Sao Paulo, Taipei, Bangkok, Moscow, Mexico City, Dubai and many more across Europe, Latin America, the US, Middle East and Asia Pacific regions.

Called “Gucci Pin”, the temporary outposts will each be open an average of five weeks. In some cases, shops will open and close over the course of a year in the same city or location, dependent on the occasion. Each pop-up event will be amplified by dedicated digital content.

The first shop opens November 5 in Hong Kong, followed by Fukuoka, Seongnam, Paris and Denver in the first wave of openings throughout the month.

Gucci Chief Executive Marco Bizzarri said in an e-mail that the Gucci Pin stores will allow the brand to reach different consumer segments than it can with its brick and mortar stores. “We are therefore looking at Gucci Pin as a new map for new territories, combining an immersive digital activation to further enhance the physical experience,” he said.

Gucci has experimented with pop-ups in recent years on an ad-hoc basis. This summer, for example, it partnered with a vintage shop in Montauk — an upscale vacation spot in the Hamptons — for the month of July and offered seasonal summer items and beachwear.

But the strategy is meant to make it easier for Gucci to execute these kinds of “ephemeral” shopping experiences, as the company calls them, at scale and across multiple locations. This is especially important because Gucci’s sales growth has slowed down this year. The brand saw revenue increase 11 percent on a comparable basis in the third quarter of 2019, compared to 35 percent in the same period the prior year. But Gucci is still on track to reach its goal of €10 billion in annual revenue in the coming years.

Each wave of Gucci Pin shops will go deep on one idea. The first spate is all about gifts, timed to the holiday season. The second, opening in early 2020, will celebrate the Chinese New Year and the Year of the Mouse. Later in the year, there will be a “psychedelic” theme, with products designed to reflect the dreamy concept.

Asia is Gucci’s largest and fastest-growing region — representing 37 percent of total sales, it grew 18 percent year-over-year in the third quarter — so it’s no surprise that many of the first stores to open are in the region, including the Iwataya shopping mall in Fukuoka, Japan; the Hyundai department store in Pangyo, Seongnam, South Korea, and Canton Road in Hong Kong, not far from the Gucci flagship store.

The choice of Hong Kong is a risky one, given that anti-government protests in the city over the past five months have ignited a recession. Kering sale overall sales in the region decrease 35 percent in the third quarter of this year.

“Our customers in Hong Kong represent a very important community for us,” said Bizzarri. “Digital technology brings us together in many ways and Hong Kong is at the forefront of this new digital world, an epicenter of innovation. Gucci Pin is therefore a natural fit.”

In the west, Gucci targeted Paris — more specifically, Galeries Lafayette Haussmann — and Denver, Colorado’s Cherry Creek shopping center. Of those locations, only Denver does not already have a Gucci store, but it’s a city with a growing market for luxury shopping — both Hermes and Louis Vuitton are renovating and expanding their presence there this year — especially around the start of the winter ski season. And with Gucci’s North American sales down two percent in the most recent quarter, the pressure is on to reengage the US market.