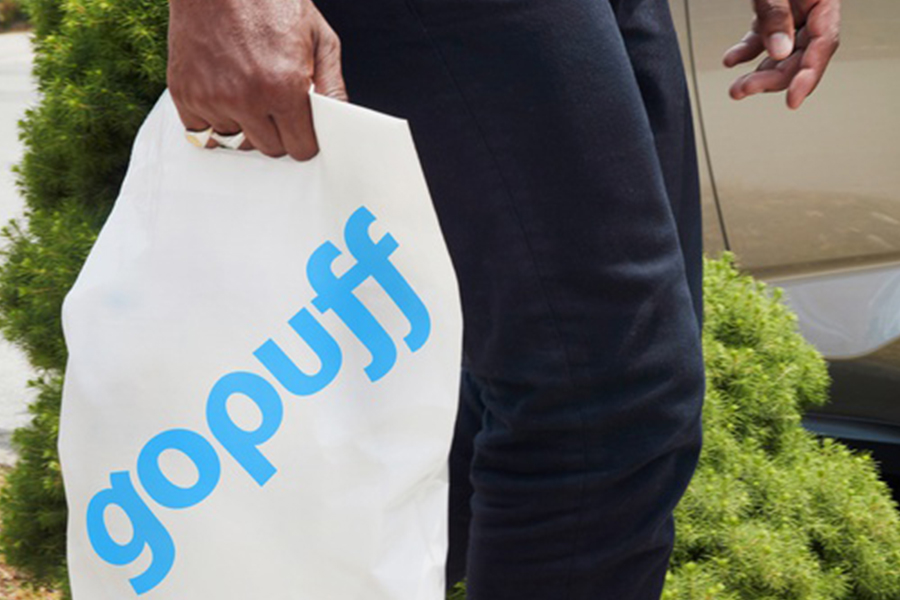 What happens when Gopuff opens one of its micro-fulfillment sites to the public?

That’s a question the fast-growing company seems curious to answer, judging by its recent application to the San Francisco Planning Department. Its proposed store model appears to do away with the self-service format common to grocery and convenience stores, relying instead on a “product stock area” common in dark stores where workers would fulfill both online and in-person kiosk orders. Its application outlined a separate “retail sales area” where shoppers can use the kiosks to browse Gopuff’s assortment and place an order, and where delivery orders are staged for drivers to pick up.

According to the company’s application, which was filed this spring, the roughly 12,000-square-foot store at 3535 Geary Blvd., which formerly housed a Pier One, will be open to the public from 9 a.m. to 6 p.m. daily and deliver orders 24 hours a day. The company expects between 50 and 100 orders daily to start, with the largest order volumes coming Friday and Saturday evenings.

Gopuff also aims to have no more than five workers in the store at a time. The staffers will be responsible for assembling orders and also providing customer service to in-store shoppers during retail hours, according to the application.

Recent media reports have noted that Gopuff is opening retail stores, including locations currently live in Florida and Texas. The San Francisco Business Times first reported the company’s store plan in that city, while the Philadelphia Inquirer reported this week that Gopuff plans to open a retail store in its hometown. But those reports haven’t yet described how the stores will operate aside from the fact they’ll serve both in-store and online shoppers.

A Gopuff spokesperson confirmed the company has opened locations in Florida and Texas to consumers.

Instead of creating separate spaces for online fulfillment and in-store shopping, or having a retail floor where shoppers and workers select products — a process that’s proving increasingly inefficient for brick-and-mortar grocers — in San Francisco Gopuff appears set to test a dual-purpose fulfillment space. The model calls to mind grocery stores before self-service came into fashion, where customers would place orders that clerks would then fulfill in backrooms. It’s also similar to more contemporary foodservice formats, including kiosk ordering at fast-food restaurants and the ghost kitchens in operation at stores like Kroger and Walmart, where workers fulfill online, pickup and walk-up orders.

A Gopuff spokesperson declined to say if the San Francisco model is being deployed at other retail stores, and indicated it isn’t the only model the company is building. Another spokesperson noted that the company gained talent in its acquisitions of alcohol retailers BevMo and Liquor Barn that has helped advance its retail strategy, and that delivery remains core to Gopuff’s business.

Since acquiring those two alcohol chains, Gopuff has turned some of the locations into fulfillment centers that include a wide range of products for delivery. Gopuff also recently acquired app-based coffee chain Bandit — further highlighting its focus on digital ordering and omnichannel retailing.

Gopuff is hardly the first online retailer to move into physical stores, joining a long list that includes large companies like Amazon and niche players like Warby Parker. This underscores the importance of bricks as well as clicks to companies’ retail strategies, even as the pandemic has boosted online shopping. But a strictly digital ordering model for in-store shoppers is unique among grocery and convenience stores, and could prove to be a useful test of shoppers’ expectations for convenience and store experience.

Gopuff offers delivery in hundreds of U.S. cities, making it a leader in the suddenly hot instant-needs e-commerce space. The company is facing pressure from European companies touting 15-minute delivery — roughly half the average delivery time Gopuff offers — as well as Instacart, which is scaling convenience delivery in partnership with brick-and-mortar grocers. DoorDash is also exploring ways to offer dark-store delivery for grocers to complement its Dashmart convenience service.