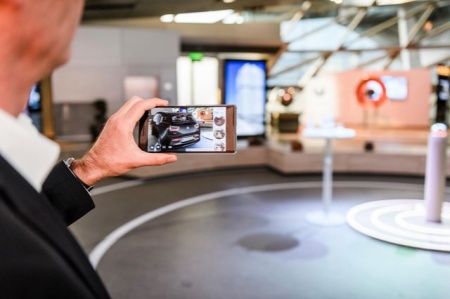 As virtual and augmented reality technology rapidly improves, analysts predict the retail industry may be one the biggest beneficiaries. IDC estimates the market for the technologies will explode from about $5.2 billion in 2015 to $162 billion in 2020.

Car dealerships will be “one of the longer-term, more profitable use cases,” said IDC analyst Chris Chute, as automakers look for way to reach customers who are increasingly less likely to enter traditional outlets.

With Google, BMW is testing a new app that displays an i3 city vehicle and i8 sports car on smartphone screens. Car shoppers can walk around the superimposed vehicles, placing it to look life-size inside their driveway or garage. Users can choose from six different colors, four types of trims and wheels, all appearing in a high-resolution image.

The Munich-based luxury automaker said the mobile app will be available at dealerships in 11 countries. “It’s possible we’ll develop a kind of library of models for this app,” said Stefan Biermann, head of innovations for sales for BMW.

At a recent presentation in Munich, the display image of an i3, even on a small phone screen, was convincing enough for users to duck and lift their legs to step inside the vehicle, where they could push a button to turn on the lights and the radio.

Bloomberg News reported earlier that Google plans to use the indoor mapping capability of Tango to generate advertising revenue. Johnsen said Google isn’t getting revenue from sales with its newly announced partnerships, but declined to comment further on business plans.

On top of the BMW app, Google announced two more developments for Tango on Wednesday. A new app allows shoppers to test clothes from the Gap brand using Tango. And Google added a new hardware partner: The Zenphone from Asustek Computer Inc. is now compatible with Tango’s technology.

However, both announcements reveal the limitations of Google’s efforts. For one, there aren’t many consumers that can try it out. The Asus Zenfone is only the second model to enable Tango, following a device from Lenovo Group Ltd.

And it’s still incomplete for consumers that try the technology. With the mobile app for Gap, for instance, shoppers try on outfits using a 3D digital avatar, rather than superimpose the clothes on their bodies. The latter tactic might arrive eventually, but the tech needed is still in its infancy.

Google is aware of the problem. In addition to challenges with realistic rendering, mobile 3D mapping is constrained by difficulties imposed by lighting and geographic space, said Johnny Lee, director of engineering for Tango. The gap between expectations of the technology and its reality can do more harm than good.

That’s also the rationale behind Google’s cautious implementation of Tango on devices, Lee explained. While the company ultimately plans for the tech to function inside every mobile device, it now doesn’t reach a vast majority of Android smartphones.

However, that might change if the tech becomes ubiquitous. Other software companies — Microsoft Corp., Facebook Inc. and Snap Inc. — are investing heavily in augmented and virtual reality. Apple Inc. hasn’t revealed any plans for AR, but Chief Executive Officer Tim Cook has touted the technology publicly multiple times. It’s unlikely Apple would allow Google’s Tango to operate on its iPhones.